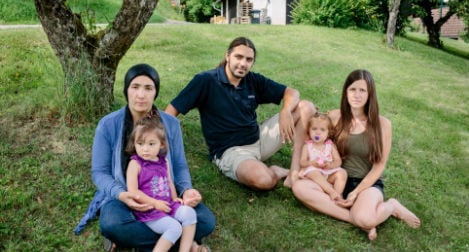 Afghan refugee Nooria Youldash has a patient and kindly manner and speaks softly and gently. Until the topic of her bicycle comes up, that is, when her eyes light up with child-like joy.

“It makes me feel special,” she said. “I am so happy with the bicycle and the freedom.”

Nooria, 36, is from Mazar-e Sharif, the third largest city in Afghanistan. She arrived in Austria in November 2015 with her two-year-old daughter, Aysu.

Nooria used to work with the United Nations Office for Project Services (UNOPS) in Afghanistan, going to remote areas of the country mostly under Taliban control, to help women and children as a midwife. She took pre-med studies for seven years and hopes to continue university in Austria so she can become an obstetrician and gynaecologist.

When Nooria became pregnant, her husband left her.

If she had stayed in Afghanistan, she would have been forced to hand over her daughter to her husband’s sisters, she said. “A woman cannot live alone in Afghanistan and raise her own child without a man.”

She left in October 2015 and arrived in Austria in November. She stayed in a reception centre for asylum-seekers in the scenic Carinthia region until someone from Diakonie, one of the largest Christian organizations in Austria, introduced her to Sabine David.

Sabine, 34, is a mechanical engineer who lives with her husband, Dominique, 36, and their one-year-old daughter, Nora, on a picturesque hilltop in Lavanttal, near the Slovenian border.

“We used to watch all the bad news on TV and felt so helpless,” Sabine said.

They approached Diakonie and told them they had a spare room that they would like to offer to a refugee, preferably a woman with a child.

Sabine and Dominique said there had been some minor misunderstandings because of language or culture, but nothing serious.

They both describe Nooria as open and supportive, always helping with the cooking or cleaning around the house.

Since Nooria had no driving license, they came up with the idea of the bicycle so she would have some freedom, but she could not ride one. So she agreed to learn.

“One afternoon the three of us tried and we failed completely,” Sabine said. “There was a lot of frustration. It’s very hard to teach an adult how to ride a bike, especially if they had never been on a bike before.”

With persistence and some help from Sabine’s aunt, a sports teacher, Nooria eventually mastered the art of cycling, but it took her three months and countless falls. Now she rides to the grocery store or to language class twice a week. She also likes riding a little bit every morning on her own.

Sixty-two people live on their hill. All the neighbours have been supportive, bringing Nooria and Aysu clothes and toys and offering Aysu rides to and from kindergarten. According to Sabine, it was not like that at first.

“It’s funny because in the beginning some people had reservations and concerns, telling us we cannot take in a stranger, that they will steal from us,” Sabine said. “But then when they met Nooria they changed their minds. Now they say, ‘It’s not the same with women and children’. Their tone and language completely changed after meeting her.”