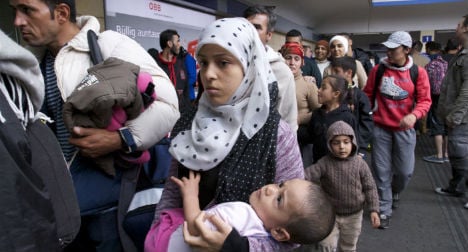 But a year on, the mood in Europe has changed. Razor-wire fences have gone up, borders are firmly shut again, and the European Union has struck a controversial deal with Turkey to keep migrants from reaching Greece — the main entry point into the bloc, along with Italy.

While the measures have led to a sharp drop in arrivals, experts warn the crisis is far from over.

“In absolute terms, the number of people hoping to find asylum in Europe via one route or another is even higher than a year ago as a result of growing conflicts,” Gerald Tatzgern, the head of Austria's anti-human trafficking force, told AFP.

“We can't exclude that such a catastrophe won't happen again,” he said, in reference to the grisly discovery made on August 27, 2015, near the town of Parndorf.

When Austrian police opened the back of a poultry refrigerator lorry left on the side of a motorway close to Hungary, they saw an atrocious sight.

The stench of human decay emanated from the cargo container where bodies of migrants lay piled on top of each other, crammed into a small rectangular space.

Among them was a baby girl, not even a year old. Investigations would later reveal that the victims — all from Syria, Iraq and Afghanistan — had been dead for two days.

The men, women and children had suffocated shortly after smugglers had picked them up in Hungary, a key transit country on the so-called Balkan migrant trail.

The case sparked international revulsion, highlighting the plight of desperate people putting their lives in the hands of traffickers.

On the day of the discovery, German Chancellor Angela Merkel was in Austria for a migrant crisis summit with Balkan leaders.

Upon hearing the news, she said the deaths were a clear call to action to tackle the issue “quickly and in… a spirit of solidarity”.

Days later, Germany – the favoured destination of many migrants – announced it would welcome all Syrian refugees.

The move triggered a wave of arrivals. By the end of 2015, more than a million people from the Middle East, as well as Asia and Africa had landed on European shores, creating the continent's biggest refugee crisis since World War II.

Countries on the migrant trail organised trains and buses to transport people to Austria and Germany, where they were greeted with applause and cheers.

Since then, the enthusiasm has waned. The crisis has fuelled anti-migrant sentiment and boosted the popularity of far-right parties across Europe.

The Balkan migrant route was shut earlier this year after countries clamped down on their borders.

In the face of growing public hostility, the EU signed a deal with Turkey in March to stem the influx.

But fears are growing that the pact could collapse amid a deepening rift with Ankara over its crackdown following a failed July 15 coup.

Migrant arrivals have been slightly on the rise again in recent weeks, particularly in Italy which has rescued some 94,000 people in the Mediterranean so far this year. Another 54,000 migrants remain stuck in Greece.

However, EU member states have become reluctant to accept more migrants and some have begun imposing restrictions.

Austria, which last year received the bloc's second-highest number of asylum requests on a per-capita basis, has capped applications for this year at 37,500.

Vienna is also considering the introduction of an emergency decree in September allowing it to reject migrants directly at the border.

Some 100 to 150 migrants and asylum seekers currently arrive in Austria per day, according to interior ministry figures.

The numbers are similar to those in August 2015 before the truck tragedy happened.

Instead of vans or trucks, “traffickers now prefer private cars,” he said. Four Bulgarians and an Afghan remain in custody in Hungary pending trial over their involvement in the case of the 71 dead migrants.

“We hope the investigation will be finished this autumn,” said court spokesman Gabor Schmidt this week.

As for the victims, all except one have been identified. Most were repatriated to their home countries, while a dozen have been buried at a Muslim cemetery in Vienna.

In their memory, the mayor of Parndorf has commissioned a play about the tragedy, due to premiere in January.