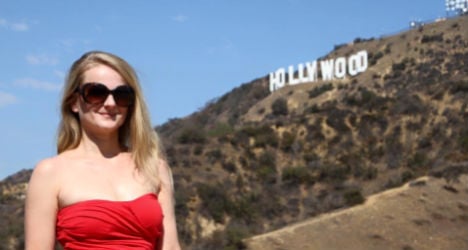 I felt like an alien when I arrived in Los Angeles. As a European dressed mainly all in black, I stuck out in colourful California. I just did not fit in at all.

Love took me from Austria to L.A. in 2001 and I was not impressed at all. That all changed over the next ten years in the City of Angeles but before I got to that point, I had to go through a number of trials and tribulations – marriage, university, health issues, divorce, a new outlook on life and a significant change of attitude: from pessimistic Austrian to American optimist.

I share my experiences and adventures in my book 'LAlien – From the Austrian Alps to the Hollywood Hills’. I always loved writing and when I returned to Austria in 2011, I felt the need to write down 'my American life’. As people kept asking me about what it was 'really' like to life in the U.S., I thought I could turn my LAlien story into a book – and so I did.

A few weeks later, Christmas season started. I wouldn’t have known by the weather. Only the flood of Christmas songs that bashed me in the ears every time I entered a store gave it away. Come mid-December, I wanted to strangle George Michael. Yes, we know she treated you badly last Christ-mas. She’s a bitch. Get over it already. You are not into women anyway! Except for the music, there was just no Christmas feeling at all! There was no snow and people were still wearing shorts. To draw Christmas shoppers to the Promenade, a truckload of snow was brought in on Saturday mornings and dumped next to the dinosaur fountains. While the parents shopped, the kids were dropped off at the snow pile to build one-hour-snowmen. That’s as long as they survived under the California sun.

With the Christmas season also came the Christmas parties. While we were still married, Barry was the client of a snazzy Beverly Hills hair salon that invited its clients and significant others to their holiday party each year. It was going to be my first Hollywood party! I was excited for about ten seconds until I found out Barry was going to be out-of-town for work. He suggested I take a friend. I agreed and was back to being excited again. I dressed up in festive red and black. In retrospect, I may have looked more like a Christmas devil than someone celebrating the holiday festivities. At the party, I soon realized that celebrating Christ’s birth and lighting Hanukkah candles was a reason to dress sexy. I looked as if I had jumped out of a Midwestern time capsule from the early 1980s compared to the other women. Nonetheless, I was excited to be there. My friend and I got a drink at the bar and looked around the room. “Hey look! There is a Mickey Rourke lookalike!” My friend turned her head and took a glance. “No, that’s him.” He wore sparkly jeans and his skin re-minded me of an old leather shoe. Scary. That scary look got him the role of a down-on-life wrestler years later launching his comeback.

A year later, at the same hair salon’s Christmas party, the salon’s star client was among the guests: Arnold Schwarzenegger, my homeboy. It was after Terminator 3 was filmed and before he became the governor of California. This time, the party was held at a restaurant in Santa Monica, which Arnold used to be part owner of. At the time, Barry and I were still together and he was there with me. We had been told that Arnold was going to make an appearance, and after more than a year in L.A., I was ready to say hello to him – in German. I was planning on using the Austrian connection to start a conversation. We were mingling when we spotted a group of mainly young males in the indoor area of the restaurant. “It’s Arnold!” “Where?” I didn’t see him. He was in the crowd of young males. I stood on my tippy toes and spotted his character-face. Was he sitting? No! He was just much shorter than I expected him to be. He didn’t seem to be the 6-foot tall guy he supposedly is and didn’t have that ‘presence’ he had in the movies. He was really quite average. That was a bit of a let down.

As I moved closer to the crowd that surrounded him, the more I realized how “in-your-face” these guys around Arnold were. They talked to him as if they had been best buddies for years. They seemed desperate and kind of sad. I didn’t want to be perceived like that. Arnold may not have been as tall as I expected, but the guys around him were still taller than me, which made it impossible to move closer. I decided to walk away, but not too far! Arnold shook off the pesky bro-crowd and sat down at a table with some other older guys. Acting buddy Ralph Moeller was one of them. The chatty young men were not allowed to follow them. Neither was I. I found a small bench near a window with a tall pot-ted plant in front of it. Barry and I agreed to watch Arnold by hiding out until he was done with dinner, and so we waited. On the bench. Behind the plant. Was this stalker behavior? Maybe.

The Austrian tradition of taking more than an hour to eat a meal was clearly still engrained in him. Eventually, we gave up. Sitting in a dusty corner, behind a plant that kept poking me in the face, was not worth the wait for the potential possibility to exchange a “Servus” with the Terminator. Once we walked back outside onto the patio with a lovely fire-pit, we ran into Barry’s hairstylist and told her about our recent adventure. She laughed and said she would introduce us to him. As we were on our way back inside with her, Arnold was on his way to come outside. Those “best friends” immediately surrounded him again. Plus, someone who looked like a bodyguard was closely following behind him. Barry’s hairstylist walked up to him and told him about the girl from his homeland as his bodyguard shoved him towards the exit. I heard him say, “Where is she?” She pointed at me. He looked in my direction and straight over my head. By the time he asked “Where?” for the second time, he walked out the restaurant’s front entrance and was gone. I really wished I were taller that day. Years later, after he became the governor of California, I saw him again. This time, he was at a sushi restaurant in Brentwood with his then wife, Maria Shriver, and two of his teenage kids. I still didn’t say hello but I got my fuzzy dark picture of him from across the restaurant. Thankfully, by that time, cell phone cameras had been invented.

PARTNER CONTENT
Six reasons why international health insurance could give you peace of mind – now and in the future
Url copied to clipboard!