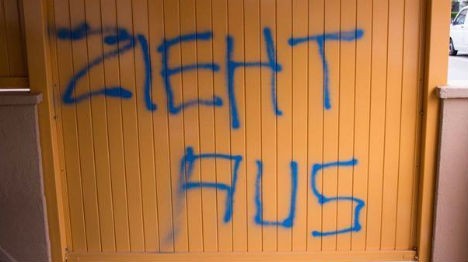 The long-running dispute saw the victim's house get smeared with graffiti - apparently from neighbours - telling him to 'Move out'. Photo: Private

Robert T. had originally claimed in September that he was attacked as he cycled home one night by three masked men, who pinned him down and carved a swastika into his forehead.

The son-in-law of his neighbours, whom he had argued with for several years, had originally been detained as a suspect but later set free.

In February this year Robert T. then claimed he was attacked a second time when a young man allegedly waved him down and asked for help. When he went to their aid, however, he was apparently hit in the back of the head and passed out.

The police became suspicious, however, after he provided contradictory statements, including that he received no injury to his head despite having apparently being hit so hard he lost consciousness.

This week Robert T was in court accused of making it all up, although he has pleaded not guilty to the charges.

His defence described the investigation as “more than questionable”, arguing that police decided the defendant must have done it himself only because they could find no DNA.

They have submitted a range of evidence requests and requested several witnesses take the stand. The trial was postponed until September 7th.