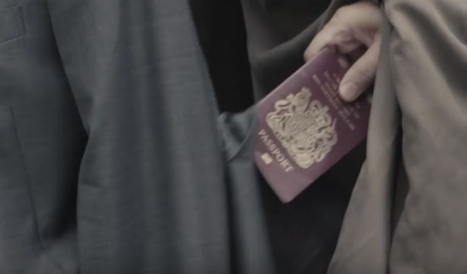 From January 1st, the Embassy have issued 102 Emergency Travel Documents (ETDs) to replace missing British passports, of which 54 were lost and 48 were stolen.

“That’s an increase of about 50% compared to the same time last year,” Embassy spokesman Lukas Wiesboeck told the Local Austria. “In particular we noticed a surge in documents reported stolen on public transport.”

Wiesboeck added that Austrian authorities are aware of the problem and concrete steps have been taken to increase public awareness, including frequent announcements on Vienna’s transport network.

In a special video for the FCO campaign, the stealth crime expert warns holidaymakers to be on the lookout for four typical scams. An unsuspecting tourist hands over her passport after being shown a 'police badge' Screengrab: FCO/ YouTube

This scam involves the thief posing as a police officer or other authority figure who quickly walks off with your passport in hand after requesting to see your identification.

If a friendly stranger points out that you have been hit by bird poo and offers to help rub you down, beware. It may be a con-artist who has planted the stain with a view to getting close and pickpocketing his victim while they are distracted.


Passport swiped from under tourist's nose at check in desk. Screengrab: FCO/ YouTube

Holidaymakers fresh off the plane are often targeted while they check in to their accommodation. A bustling hotel reception and distracted guests filling in forms can provide rich pickings for a thief who only has to lift the passports straight off the front desk.

Filching a passport from a jacket on the back of a chair. Screengrab: FCO/ YouTube

The final common scenario shown in the video involves a tourist enjoying a café con leche in a sunny plaza paying more attention to his girlfriend than his belongings, which include his passport stored within the pocket of his jacket.

The thief casually takes a seat at a nearby table, slips his own jacket on the chair and then slips the passport from his chosen victim as he pretends to reach into his own pocket.

“With identity theft on the rise, the actual cost of losing your passport could be thousands of pounds. Criminals and con-men are always evolving the tricks they use to target tourists, but a few simple precautions will really help you to stay safe,” warns Freedman

“Only carry what you really need and keep cash and other valuables in a secure pocket or bag. Remember that if you put bags down, they should always be in your line of sight. If you don’t need your passport and other valuables when you’re out and about, leave them at the hotel. Above all, trust your instincts and be aware of anyone invading your personal space.”