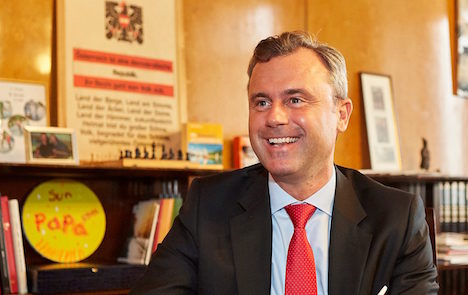 Photo: Norbert Hofer/Facebook
In an interview published on Sunday with the mass circulation Oesterreich tabloid, Norbert Hofer, the far-right Freedom Party's (FPÖ) candidate for president of Austria, outlined his position on several topics, including a proposed burka ban, similar to the one in France.
Matching a similar position to this political opponents, Hofer also supports a block on negotiation with Turkey over an EU accession.  He goes further however by suggesting that if Turkey does join, or the EU doesn't reform to allow more freedom for member states, then he would support an Austrian exit from the EU institutions.
After recent security incidents in neighbouring countries, Hofer is now leading in the polls for the re-run of the presidential elections, due on October 2nd.
When asked if he was confident of victory, he responded:
“I'm not sure of victory. But I am an optimistic and life-affirming human being and hope it ends well. When I meet people on a mountain bike tour who want to be photographed with me, the response is always positive.”
He characterized his independent opponent, Alexander Van der Bellen, as both a Green, and a former communist, while describing himself as a Libertarian.
When asked about Brexit, and the far-right parties in France and Netherlands who are adamant for an EU exit by their countries, Hofer admitted that they are not in agreement on all points, such as nuclear power, which he opposes.
In any case, he suggested that if he is elected as President, he will suspend his membership of the FPÖ, and focus on working solely at a federal level, in the interests of Austria as a whole.
Hofer also called for an investigation into the rapid mobilization of Turkish residents in Austria, which saw over 5,000 demonstrators on the streets of Vienna in the wake of the failed coup attempt in Turkey.
In particular, he was concerned about how many of those Turks kept their Turkish citizenship, which is illegal due to Austria's strict dual-citizenship laws.
He specifically called for a ban on naturalization of Turks resident in Austria, until the dual citizenship issue can be resolved.
In a related question, Hofer talked about Germany's discussion on a possible ban on religious clothing, such as a burka.
“Yes, and I think [a ban] makes sense. It's not the case that someone says, 'Wow, I want to go to Austria and must not wear my burqa.'  No. I need to know in advance that there is a burqa ban and then I can decide if I want to come.”