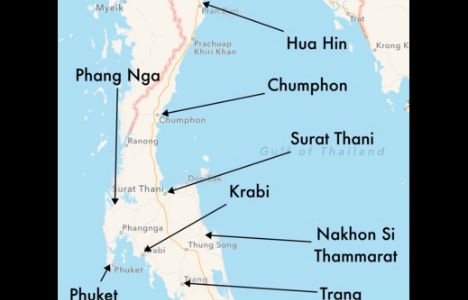 A spokesperson for the ministry Thomas Schnöll confirmed that the Embassy in Thailand is in contact with the woman, who was taken to hospital to be treated for lacerations. The Bangkok Post named the Austrian as 20-year-old Rebecca H.

At least four people have died in the explosions which all targeted tourist spots including the island of Phuket, a destination popular with European tourists, over a period of 24 hours.

According to the Bangkok Post, a total of eleven bombs exploded in different locations on Thursday and Friday and the same perpetrators are believed to be behind all the attacks. Two further bombs were found and destroyed in controlled detonations on Wednesday.

According to police, all of those who have been confirmed dead are Thai citizens, although around twenty people are thought to have been injured including three Germans, three Italians and three Dutch people.

Thai authorities also say the attacks were not likely terrorism, but rather “regional sabotage which has domestic motives behind it.”

No organisation has yet taken responsibility for the attacks.