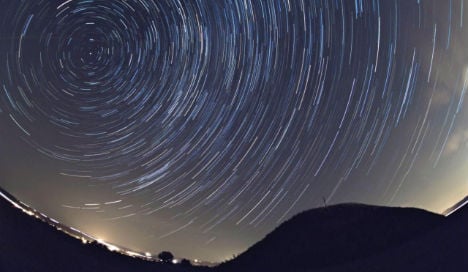 First, what are meteors?

Comet trash. They leave a dust-filled trail, and Earth speeds through their path every year on its way around the sun. Perseid is one of the brightest meteor showers of the year in our part of the world. The tiny space particles that light up the sky come from the comet Swift-Tuttle. The debris is called Perseid because it comes from the same direction as the constellation Perseus, found in the north-eastern part of the sky.

What’s the best time to watch?

Predictions of the peak nights vary between tonight and early Sunday morning (August 11th-13th). Prime viewing times in Austria are after moonset at 12.30am and before sunrise at 5.30am so be ready for a long night or an extra early morning.

Will the weather cooperate?

Meteor spotting requires clear, dark skies. If you live in the east or south of Austria and want to see the spectacle, it’s recommended you get out there tonight as the night sky will be clear. By Friday night and early Saturday morning it will be difficult to see the meteors in the east due to cloud but stargazers in Vorarlberg and possibly in the south should find it easier.

Where should I go?

In terms of location, get outside and stay away from city lights. Try to find an open area unobstructed by buildings and trees to give you the best view – which shouldn’t be too hard to find in rural Austria.

If you live in Vienna, a good stargazing spot is actually not so far away. Großmugl is a small village in Lower Austria that is used by Austrian hobby astronomists to test their equipment before heading to deserts and mountains around the world. Despite being just a 30 minute drive north of the capital, the shape of the land there means it is sheltered from much of the city lights. In fact, astronomer Günther Wuchterl is even organising guided star-gazing walks every night of the shower from 10pm.

Astronomer Franz Klauser is also hosting star-gazing evenings on Friday and Saturday at his personal observatory in Ötscherland in Lower Austria. Meet at 7pm at the town hall in Puchenstuben to join him.

Vienna Planeterium is also putting on a free “Perseiden-Party” on Friday from 7pm before heading outside to try and spot the shooting stars.

What should you bring?

The beauty of meteor-watching is that you don’t need any tools, your eyes are enough. Unless you are a professional photographer, forget about taking photos as it’s very difficult to capture star shots without specialist equipment. Phones just cause more light pollution so put those ‘handys’ away and sit back and relax.

It’s not a bad idea to also bring a friend or that special someone to share this phenomenon with. It could be the ultimate bonding experience. You have an excuse to cuddle away the chill of the night and spout out various facts about the Perseids while your significant other looks suitably impressed by your superior knowledge.

If you happen to be single, don’t fret. Ask your friends to come, or if you'd rather go alone, take a book with you for company. Just make sure to keep an eye on the skies.