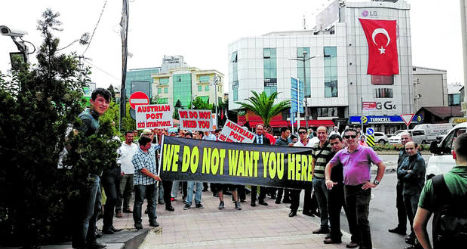 The row could have repercussions for Austrian Post in Turkey. Photo: Aras Kargo

At an event in Munich on Tuesday evening, Stoiber said that he thought it is good to address controversial issues even when it seems undemocratic.

“I think it is good when you name something even if it could be described as diplomatically unwise,” said Stoiber, former head of Germany’s Christian Social Union (CSU) which only operates in Bavaria.

He was responding to fierce criticism of Turkish President Tayyip Erdogan’s authoritarian response to a failed coup against him from Austria’s Chancellor Christian Kern and Foreign Minister Sebastian Kurz. Both who have both called for an end of negotiations with Turkey over the country’s EU membership.

Kern said that the increasing authoritarian measures taken by Turkish President Tayyip Erdogan, including arrests of thousands of critics and supporting reinstating the death penalty, and the country’s unsatisfactory economy mean it is not suitable for membership.

Kurz added his two cents, releasing a statement saying he would oppose any steps that would bring Turkey closer to joining the European Union.

The stance was resisted by German foreign minister who said the EU should still find a way forward with Turkey although membership talks were “deadlocked”.

“For me a different question is of decisive importance, namely the question of how to manage the relationship with Turkey in this difficult situation and what we can do for those who have been arrested,” he said.

Austria’s tough stance has had repercussions for the Austrian Post, which works in partnership with the Turkish delivery company Aras Kargo.

Austrian Post has a 25% holding in the company, which Aras Kargo said before the failed coup in July they wanted to buy back.

Following the diplomatic dispute between Austria and Turkey over the response to the coup, the owner of Aras Kargo Evrim Aras said the problems between the two companies have been exacerbated by the current political row.

“The growing antipathy towards Austria has also led to employees of Aras Kargo demonstrating against Austrian Post at the General Assembly. Demonstrations against the Austrians have spread all over the country at other Aras Kargo locations,” she said.