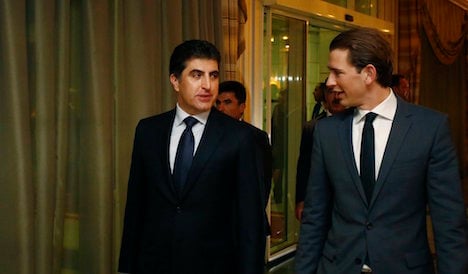 “I have a say in the matter on the (European) Council of Foreign Ministers, where it will be decided if a new chapter will be opened with Turkey. And I am opposed to it,” he said.

Decisions taken by the council have to be agreed unanimously.

The country's longstanding, and recently revived, bid to join the EU has also been undermined by Turkish President Recep Tayyip Erdogan's suggestion that he may reintroduce the death penalty after the July 15 attempted putsch.

“We have to face reality: the membership negotiations are currently no more than fiction,” Kern told the Die Presse newspaper in comments published Thursday.

“We know that Turkey's democratic standards are far from sufficient to justify its accession,” he said.

Asked by public broadcaster ORF whether he wanted to halt the talks, Kern said he would initiate a debate on the matter at a summit of leaders on September 16.

“The time has come to… clearly say that the EU's negotiations with Turkey have to be suspended or ended,” Doskozil told the Austria Press Agency in an interview published on Thursday.

Kurz told Kurier that his view was shared by Kern who would try to “convince other heads of state and government to stop accession negotiations with Turkey” during the September summit.

The EU opened a new negotiating chapter with Turkey in June as part of the European Union's March migrant deal with Ankara.

Under the deal Ankara, agreed to take back migrants landing on Greek islands in exchange for political and financial incentives.

In addition to visa-free travel, the pact includes billions of euros in aid and accelerated EU membership talks.

Muslim-majority Turkey formally launched its membership bid in 2005 and since then the EU has opened 15 policy chapters out of the 35 required to join the bloc, although it has only successfully completed one.

Kern has said he does not believe that a halt to accession talks would torpedo the refugee pact.

European Commission deputy spokeswoman Mina Andreeva said last week that membership talks were measured against a series of requirements including “the respect for the rule of law, human rights and fundamental freedoms”.

“At the moment… the opening of further negotiation chapters is not under discussion (among leaders),” she said.

In a press conference on Friday, he added that the Chancellor had taken a page from the FPÖ election manifesto, as they had for many years campaigned against Turkish membership, according to a report in the Kurier newspaper.

Strache continued his speech by again pointing out the very real dangers of Islamic terror, from groups such as Daesh, also known as Isis.  He suggested that the government should adopt a new security package, which would boost numbers of people fighting terror in Austria by 5,000 new positions.

He went on to propose special prisons only for Islamists and Salafists, claiming that the domestic Federal Office for the Protection of the Constitution and Counterterrorism, currently responsible for tackling the terrorist threat in Austria, was unable to be effective due to lack of qualified staff.

“A group of criminals who rely on Allah” is the real problem, adding “Not every Muslim is a terrorist, but unfortunately almost every terrorist in the past decade has been a radical Muslim.”