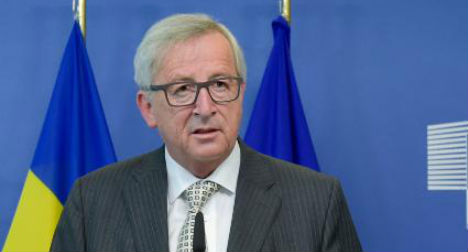 Turkey's longstanding, and recently revived, bid to join the EU has already been hit by President Recep Tayyip Erdogan's suggestion that he may reintroduce the death penalty after the July 15 attempted putsch.

But after Austria raised the prospect of slamming the brakes on membership talks, Juncker called for calm.

“If one gives the impression to Turkey now that, no matter what, the EU is not ready to take in Turkey, then I would say that is a serious foreign policy mistake,” Juncker told German public broadcaster ARD.

“I don't think it would be helpful if we were to unilaterally end negotiations with Turkey,” he said, adding that such decisions can only be made with unanimity from all member states.

“I don't see this willingness among all member states at this point in time” to break off talks, he said.

At the same time, Juncker acknowledged that Turkey has work to do in order to meet membership conditions set by the bloc.

“Turkey cannot be a member of the European Union in its current state, and especially not if it decided, as some have warned, to reinstate the death penalty. That would lead to the immediate breaking off of negotiations,” he warned.

Erdogan's suggestion that he may reinstate capital punishment, as well as other human rights concerns over the broad crackdown following the failed coup, have frayed ties between Turkey and the EU.

Ankara had signalled that it could ditch a controversial deal with the EU to halt migrant flows to Europe, if the bloc failed to meet its promises including granting visa-free travel to Turks as well as accelerating membership talks.

Juncker himself had warned last week that the pact was at risk of breaking down.

Austria ratcheted up tensions Thursday when Chancellor Christian Kern called for the EU to discuss ending accession talks with Turkey.

“We have to face reality: the membership negotiations are currently no more than fiction,” he told the Die Presse newspaper.

“We know that Turkey's democratic standards are far from sufficient to justify its accession.”

Asked by public broadcaster ORF whether he wanted to halt the talks, Kern said he would initiate a debate on the matter at a summit of leaders on September 16.

“The time has come to… clearly say that the EU's negotiations with Turkey have to be suspended or ended,” Doskozil told the Austria Press Agency in an interview published Thursday.

“Criticism is a democratic right but there must be a distance between criticising Turkey and anti-Turkey attitude,” he said.

“Such statements do no harm to Turkey, but they harm Europe's values and future,” Celik later tweeted.

“Suggesting to halt Turkey's negotiations is not defending EU values. It only pleases far-right in Europe and the coup plotter terrorists.”

Turkey's EU membership bid dates back to 1963, with its formal application made in 1987 and negotiations starting in 2005.