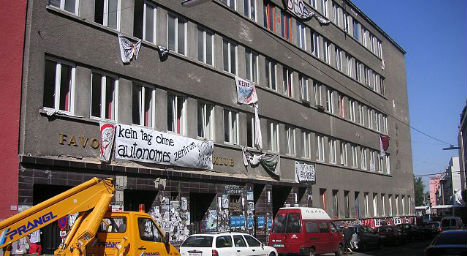 The anti-Kurdish and anti-communist group of nationalists had thought they were storming a meeting of the Kurdish workers’ federation ATIGF in Vienna’s Ernst-Kirchweger-Hauses (EKH).

In fact, the hall was being used by a group of Serbians who were celebrating a birthday with friends and family. Both parties were left confused by the unusual interruption, with the nationalists asking party-goers: “Are you Kurds?”

Although they left after realising they had got the wrong party, the group then tore down posters in the entrance hall and set alight to the materials near the stairwell in the building.

The fire was quickly put out by people from the Serbian party. “A catastrophe was probably prevented,” Nadir Aykut from the ATIGF told the Kurier.

The party-goers reportedly told Aykut the nationalists had said they would return with 50 people and burn the building down.

According to Aykut, police officers on the scene said that the office for the protection of the constitution and counter-terrorism would be told about the incident, although a police spokesperson told media they only knew of the incident from press inquiries.

Turkish-Kurdish conflict at its deadliest

There has been conflict between Turkish nationalists and Kurdish people in Turkey for decades, with Kurdish insurgent groups demanding independence.

The conflict reached its deadliest peak this year, with Turkish President Tayyip Erdogan previously ruling out further peace talks with the outlawed Kurdistan Workers Party (PKK) and promising to stamp out the conflict.

According to Aykut, Turkish people living abroad are “manipulated” by Erdogan-friendly Turkish media, which is the only source of news available. “The manipulation comes from Turkey,” he said.

It is not the first time in recent weeks that Turkish politics have spilled onto the streets of Vienna.

Following the failed coup against Erdogan in July, thousands of Turkish people living in Austria protested against the coup and in support of the President.

Some of the demonstrators turned aggressive, attacking a Kurdish restaurant in the city centre.

Austrian politicians denounced the violence, saying Erdogan should not encourage protests in support of him in Europe. Some local politicians have gone as far to ask people to remove Turkish flags from their windows.