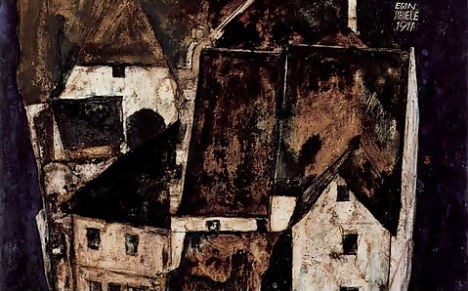 One of Egon Schiele’s paintings in his Tote Stadt series. Image: Wikimedia

The ruling was made by the Supreme Court on Wednesday after the Lentos Kunstmuseum lost their final appeal against paying the compensation for the lost artworks, a case that has been in dispute for a decade.

The art museum – which is run by the Linz city authorities – must now pay €8.24 million plus 4 percent interest to the heirs of painter and art collector Olga Jäger, who died in 1965.

The works by two of Austria’s most famous artists were given on a long-term loan by Jäger to the museum in 1951.

In 2006, her heirs asked for the artworks back but when it was revealed the museum had lost them, they took the institute to court.

The Supreme Court already ruled in 2011 that the museum pay €100,000 in compensation for one of the Schiele artworks – the drawing ‘Paar’.

The latest compensation concerns the Klimt drawing ‘Zwei Legende’, the Schiele watercolor ‘Junger Mann’, and the Schiele oil painting ‘Tote Stadt’, which were also owned by Jäger but lost by the museum .

However the latest ruling by the Supreme Court may be challenged by Linz, after the director of the museum claims to have found evidence that Jäger said the long-term loan should be terminated in 1990.

If that’s the case, the ruling could be made void due to statutes of limitations as the legal challenge was filed too late – 16 years – to be heard in court.