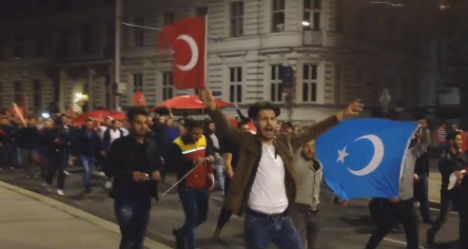 The suggestion of bringing back the death penalty in Turkey in response to a failed coup attempt against Turkish President Tayyip Erdogan has been described as “absolutely unacceptable” by Austria’s foreign minister.

Austrian Foreign Minister Sebastian Kurz made the remarks in an interview published with the Kurier newspaper on Monday.

“The introduction of the death penalty would of course be absolutely unacceptable,” he said. “There must be no arbitrary purges, no criminal sanctions outside the framework of the rule of law and the justice system.”

Following a failed attempt to overthrow Turkish President Tayyip Erdogan on Friday and Saturday, the Turkish leader said the parliament will consider introducing the death penalty for those involved in the attack against him.

During a speech he gave to supports in Istanbul on Sunday, many in the crowd were heard calling out “we want the death penalty”.

As well as warning against reintroducing the death penalty, Kurz called on the Europe to show Erdogan “clear limits”.

Speaking before a meeting of his EU counterparts in Brussels today, he also appealed to EU partners not to abandon the EU-Turkey deal on returning migrants and asylum seekers.

As news broke of the attempted coup against Erdogan, many of his supporters in Austria took to the streets in Vienna and Linz waving Turkish flags.

Around 4,000 marched to the Turkish embassy in Vienna on Friday night before moving to the first district around 3am Saturday morning, causing part of the Ring to be blocked.