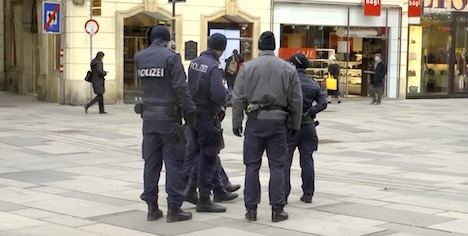 Police officers in fluorescent jackets in the July sunshine stand at the border. They wave through the car with the bikes on the back, but the van with the tinted windows is pulled over and checked.

The “West Balkans route” that saw hundreds of thousands of migrants pass through Austria in 2015 is closed, and a deal between Turkey and the European Union has dramatically slowed the influx.

However, around 50,000 migrants remain stuck in Greece, and many are turning to alternative routes and to people smugglers to get them into western Europe — hence the Austrian police activity.

Until recently, police were intercepting between 400 and 500 people sneaking into Austria every week. As of June 1, 4,073 had been intercepted, not much less than the 4,546 in the same period last year.

Authorities want in particular to prevent a repeat of last August when a truck carrying the decomposing bodies of 71 migrants was found on the side of the motorway — a horrific low-point in last year's drama.

Since July 1, checks have even been stepped up, causing major traffic jams at this border — a frontier within Europe's Schengen zone where until recently, goods and people could pass freely.

“The intensification was decided on when we realised that the number of migrants being intercepted reached the same level as last year,” said Daniela Landauer, a local police spokeswoman.

“This was a sign that smuggler activity has not slowed down,” Landauer told AFP.

One who made it through is Bashar, a 22-year-old Afghan, who spent several months in Athens before making it to Austria in June, but not before he was obliged to apply for asylum in Hungary.

“I am afraid they are going to send me back (to Hungary),” the young man told AFP by phone from an asylum centre in western Austria. According to EU rules, this is what should happen.

For now he can rest easy. An Austrian court ruled last September that refugees could not be sent back because of “inhumane conditions” in Hungary. And in any case Hungary refuses to take anybody back.

But this may change. Austria's centrist government, under pressure from a resurgent far-right, has for several weeks been pressing Prime Minister Viktor Orban's government to change its policy.

And at the same time, Vienna is making preparations to close its borders completely, including at the Brenner Pass on the frontier to Italy, another major entry point.

At Nickelsdorf, several dozen temporary office buildings — so far completely empty — have been put in place.

The closures are meant to kick into force once the number of migrants coming into Austria this year hits 37,500. At that point — so far, 22,135 have entered — Vienna has said it will turn people away.

To allow this to happen, Austria's abrasive new Interior Minister Wolfgang Sobotka is pressing for parliament to approve the necessary “emergency decree”.

Sobotka insists Austria has no other choice while “so many other European Union members fail to do their part” to stop the influx.

“We cannot shoulder the whole world's burden,” he said earlier this year.

Neighbouring Hungary may yet save him the bother, however.

Since July 5 Hungary's police and army have been forcibly returning to Serbia any migrants found within eight kilometres (five miles) of the border — prompting outrage from rights groups.

On Thursday Sobotka announced the dispatch of 20 Austrian police officers to help their Hungarian counterparts.