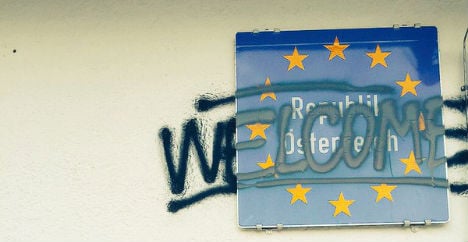 Only around 40 percent of those affected have given police permission to build a fence on their land, many arguing it would damage the relationship with their Slovenian neighbours.

“Not once during the time of the Cold War or when the border between Carinthia and Yugoslavia burnt 25 years ago due to the struggle of freedom of the Slovenian defence against the People’s Army, has a fence been necessary,” Franz Sadjak from Bleiburg told the Kurier.

“Why should we now disturb the acquired friendly relationship with the building of a fence?

The government hopes to build fences along parts of the border with the intention of channelling refugees if high numbers of people begin to arrive in the coming months as they did last summer.

The move is part of country-wide measures, including the strengthening of border controls and building of new reception centres, in preparation for a potential repeat of last summer when millions of asylum seekers crossed Europe.

So far, the continent is not seeing the same influx it did last year, although the number of asylum seekers reaching Europe’s shores is still in the hundreds of thousands.

Austria has received 20,003 asylum applications so far this year, plus a further 6,300 applications from people who the government wants to return to the first EU country they entered under the Dublin Regulation.

As part of the Austrian government’s asylum measures, police in Carinthia have been negotiating for weeks with land owners around the border areas of Grablach, Lavamünd, Raunjak und Leifling over the building of a fence.

“We are not talking about a complete fence but a couple of kilometres at certain transition points – depending on the topography,” said police spokesperson Rainer Dionisio.

Some locals have argued, however, that it is “nonsense” that you can channel people in the mountains.

Ivica Tomic, 69, who lives on the Slovenian side of the border added: “Other than that, as children we were not allowed to speak at all with the Carinthians, although we were always neighbours. Now we are friends and suddenly we should be separated again by a fence?”

Local Austrian politician Christoph Haselmayer (NEOS) has also said his family have refused to allow the government to build a fence on their land, pointing to the history of war in the region.

“My father Wilfried experienced the time in the Cold War when the Yugoslavians built border watchtowers, my grandfather was killed in the Second World War. We need a European-wide solution and not border fences that refugees can circumvent or go round,” he said.