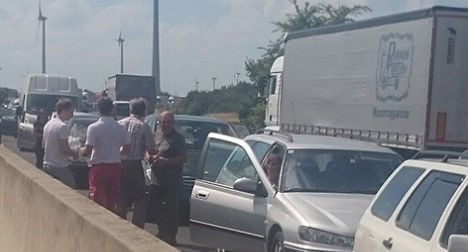 The move by Hungary is seen as a response to Austria recently strengthening controls on its side of the border in a bid to catch smugglers, causing traffic jams in both Austria and western Hungary earlier this week.

On Monday and Tuesday, Austrian controls led to traffic jams for several hours and early this morning further checks brought traffic to a standstill again.

After Hungary responded with their own controls on arrivals from Austria, Sobotka summoned the Hungarian ambassador to the Interior Ministry to discuss the growing diplomatic row between the two countries.

Speaking to the ORF on Tuesday evening, Sobotka said the controls on people entering Hungary from Austria are “totally unjustified”.

He added that they are not in the spirit of the EU Schengen agreement that allows residents to cross into neighbouring EU countries without going through border checks.

The minister defended the controls in Austria, however, saying smugglers trying to ferry migrants and refugees across the border are being found every day. “That’s why we have strengthened the border controls,” he said.

The latest controls were focused on the area around the border town of Nickelsdorf, which temporarily became the centre of the European refugee crisis last year after hundreds of asylum seekers arrived there daily from Hungary.

He added that Hungary’s refusal to take back asylum seekers under the Dublin Regulation, which states asylum seekers must register in the first EU country they arrive to, was “not reasonable”.

This regulation broke down last year with the arrival of high number of asylum seekers and migrants to Europe’s borders in the summer.

Austria’s cap on the number of asylum applications it is willing to accept in the country – set at 37,500 for 2016 – does not include those who they want to return to other EU countries.

The government are keen to send asylum seekers back to other EU countries, although Hungary is currently refusing to accept any.

Austrian Chancellor Christian Kern has announced he will visit the Hungarian Prime Minister Viktor Orban to “clarify” the situation regarding the return of asylum seekers.