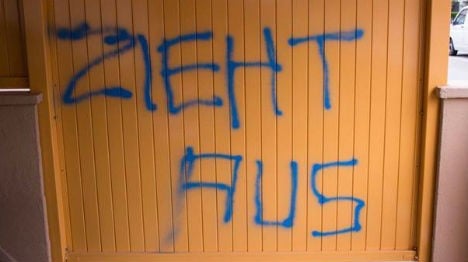 The long-running dispute saw the victim's house get smeared with graffiti - apparently from neighbours - telling him to 'Move out'. Photo: Private

Prosecutors had been investigating Robert T. and his wife for several months after police became suspicious that their statements did not add up.

The bizarre case happened over the course of several months late last year and early this year, after a long-running dispute between the couple and their neighbours got out of hand.

The 52-year-old had first claimed in September that he was attacked as he cycled home one night by three masked men, who pinned him down and carved a swastika into his forehead – just like the scene in the Tarentino film Inglourious Basterds.

In February this year he then claimed he was attacked a second time when he said a young man waved him down and asked for help, saying his girlfriend was trapped in the car. When he went to their aid, however, he was apparently hit in the back of the head and passed out. Police had initially been led to believe that the suspects were neighbours who had have been trying to force Robert T. and his family to move out of their home in a dispute which goes back years.

Their suspicions were raised, however, after he provided contradictory statements to police, including that he received no injury to his head despite having apparently being hit so hard he lost consciousness.

Now Austrian prosecutors have charged him with providing false testimony and making a false complaint.

Psychiatrists consulted by the prosecutors concluded that he had carried out the bizarre actions for attention.

His wife was also charged with providing false testimony and defamation. A date for their trial has not yet been set.