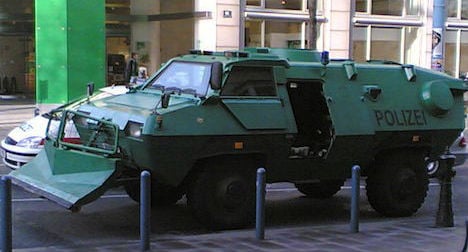 This WEGA armored vehicle was used in the police operation. Photo: Der Polizist/Wikimedia

Police spokesman Gerhard Pürstl confirmed to the ORF that an Austrian who lived with the robber has been arrested in connection to the incident that took place at a Billa supermarket in the Penzing district of Vienna.

“The man brought the perpetrator to the area in a car share and then waited for him in a pub near the location,” said Pürstl. Weapons were also found in the apartment shared by the two men.

Three police officers in total were shot at after responding to a silent alarm triggered by the supermarket employees who were being held hostage by the armed robber.

Upon encountering the robber, two of the police officers were seriously injured after being shot by a silenced pistol, in what was described by police as a “professional” action.

The 49-year-old gunman was tracked down by the highly-trained WEGA police armed-response unit, and killed in a firefight. The Bosnian-born man is the primary suspect in at least two prior armed robberies.


This eyewitness video shows police storming in to rescue their wounded colleagues. Credit: Kurier/YouTube
After being evacuated by rescue helicopter to Vienna's general hospital, one of the police officers – a 23-year-old policeman – went into emergency surgery for a life-threatening head wound.

Media were initially reporting that the officer had died from his injuries, although the police have since confirmed he is still alive, although in a critical condition.

Responding to criticism that such a young police officer was sent to the scene, Pürstl said the two police cars attended the scene and added: “There was also a very experienced colleague there. There is no evidence that either a lack of professional experience or a particularly young age played a role here.”