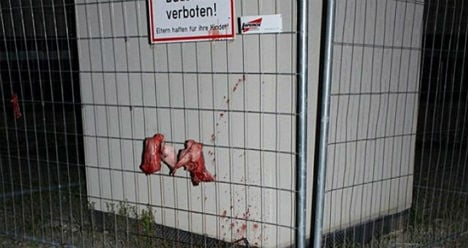 A man from the far-right scene was arrested in May, accused of hanging two pig heads on a fence outside the mosque and smearing the minaret with blood.

The mosque was being constructed alongside an Islamic centre.

Prosecutors now say they believe staff at the army’s defence office knew the man was planning to deface the mosque, and that they did nothing to stop him.

In particular, they are investigating an informal employee who is used by the army defence office as an informant. He is reported to have infiltrated the far-right scene and is suspected of having known about the mosque attack and to have even participated in it himself. He claims that he informed his commanding officer of the attack but that nothing was done to stop it.

The defence ministry said it only learnt of the allegations a few days ago, but will examine all the details closely. Army spokesman Michael Bauer said an internal audit has been ordered but that the investigation may take some time.

The Islamic Cultural Centre told the ORF that it was surprised by the new allegations and called for appropriate consequences to be taken, where necessary.

Austria’s interior ministry reported a 54 per cent spike in hate crime over the last year, with increasing reports of vandalism, assault and inciting hatred against foreigners.