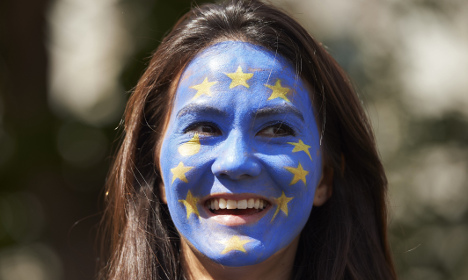 The EU has to do more to project its image, says IMF chief. Photo: AFP

“This is not a time for grand visions,” the 73-year-old veteran minister, long a passionate supporter of the European project, told Welt am Sonntag weekly.

“The situation is so serious that we have to stop playing the usual European and Brussels games,” Schaeuble said.

Schaeuble, a member of Chancellor Angela Merkel's Christian Democratic Union (CDU), said the EU had to work “with speed and pragmatism” to unlock growth and thus create jobs.

He sketched initiatives from a common energy policy to job training to harmonising national defence procurements.

The CDU's coalition partners, the Social Democrats, meanwhile stressed strengthening the safety net for the poor or unemployed — two big factors in the perceived collapse of confidence in the EU.

The goal must be to “not only create competition but also social security,” said Vice Chancellor Sigmar Gabriel, describing the crisis in Greece as a pointer of a possible north-south split in Europe.

In the southern French town of Aix-en-Provence, the European commissioner for economic policy, Pierre Moscovici, called for “strong initiatives… to reinvent Europe.”

“Status quo cannot be a reply to Brexit,” he said, referring to the June 23rd referendum in which a majority of Britons voted to leave the EU.

The vote dealt a body-blow to European federalists, who want the bloc's states to come into an ever-tighter embrace.

Critics of federalism argue many citizens are hostile to Euro-centralism. They contend Brussels is not addressing concerns about jobs, living standards and migration.

Moscovici threw his weight behind widening and extending the so-called Juncker Plan — a scheme named after European Commission President Jean-Claude Juncker which uses EU funds as a lever for investment in areas such as energy, infrastructure and research.

The three-year plan, running from 2015 to 2018, has funds of 21 billion euros ($23.39 billion) from the EU budget and the European Investment Bank (EIB), with the hope that this will leverage private investment of 315 billion euros.

In its current form, the Juncker Plan “is probably insufficient, both in scale and timeframe,” Moscovici told journalists at a business meeting in Aix.

International Monetary Fund (IMF) chief Christine Lagarde, who also attended the meeting, said the EU had to do more to project its image so that citizens were more aware of some of the benefits of membership.

“When for instance the European Investment Bank makes very big investments in areas but doesn't say very much and people aren't aware of it, without there being a measure of Europe's economic effectiveness, that's incredible,” Lagarde said.

“It means that the talk will continue to be about 'excessive regulation, bureaucracy, it's all Brussels' fault',” Lagarde said.

Pollsters say regions of Britain such as Cornwall, Wales and Yorkshire which have been huge beneficiaries of EU funds were also those that voted hugely in favour of leaving the Union.

Lagarde said laconically that Britain's exit should simplify decision-making in the EU.

“Now that the English have, in inverted commas, left… at least there are a number of things that I've heard European commissioners say, one after another, ''it's so complicated — we can't do it because of the British',” Lagarde said.

“Perhaps there are now things that should be envisaged, as the British won't be at the negotiating table,” she said.

Lagarde did not elaborate, but French Economy Minister Emmanuel Macron said that the British departure could open the way to strengthening the eurozone.

“We have become a bit paralysed in thinking that there taboo geographical areas, and we have spent months and months not daring to meet as members of the eurozone, thinking it would upset the Poles and British.”

Moscovici reiterated ideas for boosting the 19-country eurozone, with a common budget and a “common economic policy.”

Hundreds of billions of euros and counting have been shelled out since Russia invaded its pro-EU neighbour in late February.

Governments have gone all out: from capping gas and electricity prices to rescuing struggling energy companies and providing direct aid to households to fill up their cars.

The public spending has continued, even though European Union countries had accumulated mountains of new debt to save their economies during the Covid pandemic in 2020.

But some leaders have taken pride at their use of the public purse to battle this new crisis, which has sent inflation soaring, raised the cost of living and sparked fears of recession.

After announcing €14billion in new measures last week, Italian Prime Minister Mario Draghi boasted the latest spending put Italy, “among the countries that have spent the most in Europe”.

The Bruegel institute, a Brussels-based think tank that is tracking energy crisis spending by EU governments, ranks Italy as the second-biggest spender in Europe, after Germany.

Rome has allocated €59.2billion since September 2021 to shield households and businesses from the rising energy prices, accounting for 3.3 percent of its gross domestic product.

Germany tops the list with €100.2billion, or 2.8 percent of its GDP, as the country was hit hard by its reliance on Russian gas supplies, which have dwindled in suspected retaliation over Western sanctions against Moscow for the war.

Spending to continue rising
EU countries have now put up €314billion so far since September 2021, according to Bruegel.

“This number is set to increase as energy prices remain elevated,” Simone Tagliapietra, a senior fellow at Bruegel, told AFP.

The energy bills of a typical European family could reach €500 per month early next year, compared to €160 in 2021, according to US investment bank Goldman Sachs.

The measures to help consumers have ranged from a special tax on excess profits in Italy, to the energy price freeze in France, and subsidies public transport in Germany.

But the spending follows a pandemic response that increased public debt, which in the first quarter accounted for 189 percent of Greece’s GDP, 153 percent in Italy, 127 percent in Portugal, 118 percent in Spain and 114 percent in France.

“Initially designed as a temporary response to what was supposed to be a temporary problem, these measures have ballooned and become structural,” Tagliapietra said.

“This is clearly not sustainable from a public finance perspective. It is important that governments make an effort to focus this action on the most vulnerable households and businesses as much as possible.”

Budget reform
The higher spending comes as borrowing costs are rising. The European Central Bank hiked its rate for the first time in more than a decade in July to combat runaway inflation, which has been fuelled by soaring energy prices.

The yield on 10-year French sovereign bonds reached an eight-year high of 2.5 percent on Tuesday, while Germany now pays 1.8 percent interest after boasting a negative rate at the start of the year.

The rate charged to Italy has quadrupled from one percent earlier this year to four percent now, reviving the spectre of the debt crisis that threatened the eurozone a decade ago.

“It is critical to avoid debt crises that could have large destabilising effects and put the EU itself at risk,” the International Monetary Fund warned in a recent blog calling for reforms to budget rules.

The EU has suspended until 2023 rules that limit the public deficit of countries to three percent of GDP and debt to 60 percent.

The European Commission plans to present next month proposals to reform the 27-nation bloc’s budget rules, which have been shattered by the crises.

TRAVEL NEWS
Passports: What are the post-Brexit rules for dual-nationals travelling in Europe?
Url copied to clipboard!