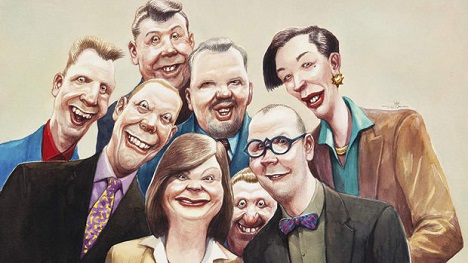 Photo: A sample of the work of the late cartoonist

The caricature artist died at the age of 67, after suffering a cardiovascular collapse last September due to his life-long smoking habit.

He is a household name in Austria and was famous among the public for perfectly capturing the Austrian “soul”.  He also influenced many other Austrian cartoonists.

“I can not image a world without Manfred Deix, with whom I was connected with my whole life. I will miss him infinitely,” fellow artist and friend Gottfried Helnwein wrote in a press statement.

Deix worked mostly in watercolour. His work was very critical and often discussed taboo subjects. His work served as social criticism and aimed to uncover institutional or personal misconduct.

He was particularly critical of the far-right politician Jörg Haider, whom he often depicted as Hannibal Lector or a tiger.

“Manfred Deix was one of Austria’s best artists. There were and are many taboos and uncomfortable truths that we couldn’t talk about and Deix opened our eyes with his images,” says Caricature Museum Krems Director Gottfried Gusenbauer in a press release.

The characters of his cartoons, ‘Deixfiguren’ were so famous that they became a proverb and were even added to the Duden, the dictionary of the German language.

His work has been published in multiple magazines, like ’profil’, ‘stern’ and ‘Spiegel’, starting in 1972.

Deix was born in St.Pölten in 1949 and loved drawing even as a young child. His parents owned a local public and wanted him to run the pub when he was older, but he had other plans.

At the age of six, he got in trouble for selling nude drawings to fellow classmates.

A few years later at the age of 11 when he sent a cartoon to the ORF for a drawing contest, he was disqualified due to the fact that they wanted drawings “from children, not adults or professionals”.

Deix was instrumental in the founding of the caricature museum in Krems in 2001, the only museum for image satire and critical graphics in Austria, where to this day he is honoured with an exhibit of his work.

Staff at the museum said in a press release that they are deeply affected by his death and are mourning the loss. “With him the Austrian caricature and drawing scene loses one of the most critical and influential artists of our time,” they wrote.