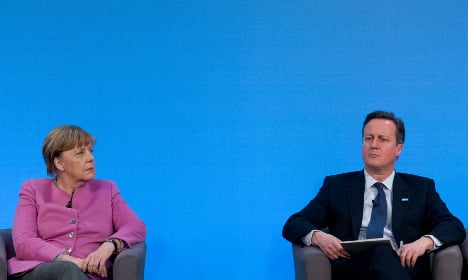 Merkel also insisted that deterring other countries from leaving the EU should not be a priority in the talks.

Merkel did however say that Britain's exit talks should not “drag on forever” and that until they were completed, Britain would remain a fully-fledged EU member “with all the rights and responsibilities”.

“We have to follow the rules of the game,” she said.

Merkel was speaking after several EU foreign ministers – including Germany's – had urged Britain to quickly activate its exit.

“It shouldn't take forever, that's right, but I would not fight for a short timeframe,” she said.

She added that she was seeking an “objective, good” climate in the talks with Britain, which “must be conducted properly”.

Merkel also emphasised that even from outside the EU, “Great Britain will remain a close partner with close economic ties to us.”

Her remarks suggest that the weekend has brought Britain and Europe no closer to clarity on the implications of Thursday’s British referendum on leaving the EU.

Merkel’s cautious approach put her at odds with some of her governing coalition partners in Germany.

They are not in agreement on whether the vote, though technically non-binding on the British parliament, should lead immediately to negotiations with the 27 other EU member states on a formal exit strategy.

VISAS
EXPLAINED: What happens if you overstay your 90-day limit in Austria?
Url copied to clipboard!