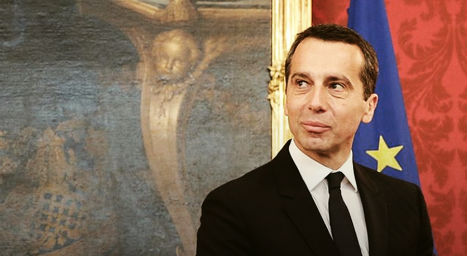 In a statement released following the result, Chancellor Christian Kern described it as a bad day for Austria and warned that Europe would lose its position and role in the world. “This is a bad day for Great Britain, a bad day for Europe, and also a bad day for our country,” he said.

He added that the economic impact “will be felt for some time”, the negative developments must be “kept as small as possible” and reform must start in Europe. “This must have a clear direction,” he said.

The Chancellor and leader of Austria's Social Democratic (SPÖ) party said, however, that there will not be a domino affect and that no referendum will follow in Austria.

Austria’s Foreign Minister Sebastian Kurz, from the conservative OeVP party, said he was surprised by the result as he believed – as many others – that Britain would vote to stay.

“Not a stone is left standing, that is a political earthquake,” he said, adding that it could set off a domino effect with other countries who will also consider exiting. There must be “much change and the speed has to be quick,” he added.

Speaking to the Local Austria, Austrian MEP Eugene Freund (SPÖ) – who made headlines this week after his Brexit Poem appealing for the UK to stay made it onto a late-night US satire show – said he was “flabbergasted” when he woke up to the news this morning.

“It’s a catastrophe, I do not want to imagine the consequences,” he said, arguing the case was not made for how important the EU project is. “Nobody talks about the real issues, about the peace the EU has protected for seventy years.

“It was over-shadowed by immigration and by refugees, although the UK has not been that affected by that.”

On the UK’s future relationship with the EU, Freund says he expects the divorce to be an “ugly” process. “It’s going to be a hard divorce trial, both sides will try to get the best out of it.”

With around 25,000 Austrians living in the UK and 9,000 British people in Austria, the long-term question of what will happen to these people is also unclear. “Nothing will happen today or tomorrow but in two years will you need a visa and work permit? Will you get flown out of the country? We don’t know what the future will be,” said Freund.

Austrian Green MEP Ulrike Lunacek also told The Local Austria she is disappointed with the result but added it “must not leave the EU paralysed or stuck in limbo while negotiations take place.”

“They cannot distract the remaining 27 EU member states from concentrating on tackling the issues that really matter to the citizens of Europe. This should not mean more deals done between member states behind closed doors – this clearly did not work for David Cameron,” she said.

Meanwhile the head of Austria's far-right and EU-sceptic Freedom Party Heinz-Christian Strache congratulated Britain for voting for an exit.

“We congratulate the British for regaining their sovereignty. The result of their referendum yesterday is paving the way for democracy and against the political status quo, but also against the continuing migration madness,” he said.

The fall of the pound is also expected to affect those holidaying in popular destination regions like Tyrol, making holidays there pricier.

Head of the region’s Chamber of Commerce Jürgen Bodenseer agreed that for many English holidaymakers will find visits to Tyrol becoming more expensive.

“The prices in the export and tourism industry are all on the brink,” he told the ORF, adding that it is hard to make a profit. “It is a huge catastrophe in my opinion “