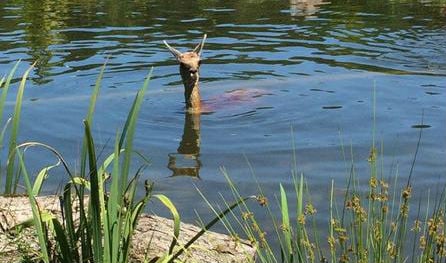 The llama escaped from its enclosure in Wollsdorferegg and got lost, ending up in the lake belong to a neighbouring family.

The fire department had to be called to carry out a rescue operation because the llama was unable to get out of the lake by itself due to its slippery edge.

They used a water hose to help the curious llama safely step out of the lake before taking the animal home.

Another curious incident involving llamas in Austria happened a year ago, when nine llamas were found dead in Carinthia. It was unclear at the time what had caused their deaths. Llamas are a surprising find in the Austrian countryside.  Photo: Paul Gillingwater

“Many people are envious of me, so maybe the llamas were poisoned. It’s going to cost me €20,000,” he told the Kurier newspaper last year.

A district commissioner and a veterinarian carried out a site inspection at the time but did not reach any conclusions as to what caused the animals’ deaths.

Last year, the farmer said he would ask for an autopsy to be carried out but it is unclear what the results of the autopsy were.

Llamas, which are more closely related to camels than other domestic livestock, are primarily farmed for their hair – and, in South America, for meat.