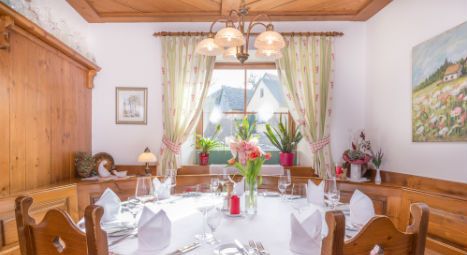 Only 1,443 traditional guesthouses currently exist in Upper Austria, a drop of 532 places since the year 2000, according to OÖNachrichten.

Bureaucracy and the lack of possible income are the biggest reasons for the fall, Manager for Catering Stefan Praher told OÖNachrichten.

There is hope for the future, however, because this year there were more trade license registrations than de-registrations. The catering sector in Upper Austria has grown by 180 companies.

To help ensure that the local guesthouses in Austria do not disappear, The Local has assembled a list of four very cute and traditionally Austrian ‘Gasthäuser’ you can visit. This cozy little tavern markets itself as being the smallest ‘Wirtshaus’ in Tyrol. It consists of one small room decorated in traditional Tyrolean style with a small masonry heater. In the summer, you can grab your meal outside in the beer garden between the tavern and the neighboring church. They serve drinks and snacks, however food has to be pre-ordered. Their Zillertaler donuts are very famous and a house specialty. The little tavern was in build in 1780 and has been owned by the Unterrainer Family since 1929. Gasthaus Schwarz is a more luxurious but still a traditional Austrian restaurant in the Waldviertel area. It is the perfect mix of traditional Austrian cooking and feeling but with tablecloths and high-end plating. It has belonged to the Schwarz family since 1917 and they advertise that they still cook the food themselves. Some of their food is even cooked with their own ingredients, such as the dumplings, which come from potatoes that they grow themselves. Falstaff gave this restaurant a rating of four out of five forks and according to them the simple country cooking is what makes them stand out. This restaurant offers a getaway from big cities and road noise, to the ‘village of storks’ in Marchegg near the Slovakian border. If you are there in spring or summer, you can catch a peek at the storks that nest in the surrounding area. On their menu you can find regional specialities, such as Beef stew with potato dumplings and various vegetable soups. They advertise that their ingredients all come from local farmers, hunters and butchers. Something they are known for is their live music nights and other events that are held in the restaurant.

The Roithmeiers bought this house just after World War II and it has since been run as a quiet, comfortable and regional restaurant. They have a gorgeous guest garden, and two rooms inside. One of the rooms is a traditional ‘Jägerstube’, which features traditional Austrian animal trophy heads on the wall. Their kitchen is oriented towards the Austrian taste with lots of Schnitzel and grilled meat dishes. However they also offer fish dishes, advertised on their website alongside the quote: “The fish wants to swim three times, once in water, once in lard and once in wine.”