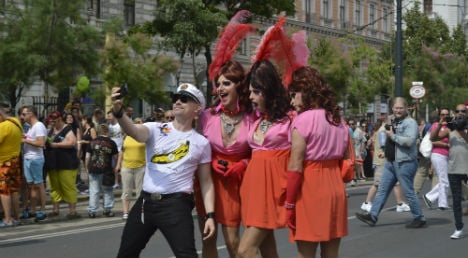 Every summer more than 100,000 people from all over the world gather for the annual Rainbow Parade (Regenbogen Parade), where they celebrate tolerance, solidarity and equality.

In June 1969, the first protest led by LGBT people against arbitrary police action took place in New York’s Christopher Street. Vienna has held its annual Regenbogen Parade in the memory of that event since the summer of 1996.

Yesterday’s parade in Vienna, the city's 21st gay pride, held special significance as it paid tribute to the victims of last Saturday's Orlando shooting, where 50 people were shot dead after gay nightclub Pulse in the US was targeted in a homophobic terrorist gun attack.

The tragedy that occurred in Orlando did not stop people from joining in and coming together to stand in solidarity with the LGBT community in Vienna.

As is often the case with gay prides, a counter protest did take place, although it did not disrupt the parade in anyway. Many visitors who had travelled from eastern Europe, where there is often more resistance to LGBT events, appreciated the ease with which they could celebrate in Vienna.

“It is impressive how big [the parade] is and how much support there is for the parade in Vienna,” Zofia Reuter from Poland told the Local.

“In Poland there are always Neo-Nazi counter protests, but not here. I even checked the first year I came,” She added.


A tribute to the Orlando victims. Photo: Helena Uhl.

Trucks sponsored by Austria’s Green Party, Almdudler, the club ‘Why Not’ and many others, along with thousands of people, descended on the area near the town hall and danced their way around the Ring Boulevard for four hours.

Some parade-goers dress up in costumes, others in bondage accessories and some spray their entire body in the colours of the rainbow, in celebration of the pride principle that a person can be whoever they want to be.

Many people carry signs offering ‘free hugs’. Others carry posters protesting against homophobia and Austria’s far-right Freedom Party. Some groups bring to light important LGBT issues, such as AIDs awareness, the many countries where homosexual acts are still illegal and the importance of standing up against discrimination against the LGBT community in general.

Austria is not necessarily known as the most liberal country in Europe, with laws still prohibiting same sex marriage. However Vienna’s LGBT scene is becoming more vibrant year by year and the city is very different from the rest of Austria in that regard.

“It is a liberal city in a conservative country,” says pride-goer Richard Sentinella. Even the Vienna Tourism Board is now heavily endorsing Vienna as the ultimate LGBT tourist destination.

Austria as a whole is also becoming increasingly tolerant. A study in 2015 revealed that 78 percent of people would not be bothered if one of their family members came out as homosexual. A similar number would also not be bothered by same sex marriages within the family.

Sentinella describes the parade as a “nice show of support and community for LGBT people” as well as a great way to “show that there is still work to be done”. It's also very fun, he adds.

As another pride-goer Claire Palzer told the Local: “Every place needs a gay pride parade!”

Want to discover more about LGBT life in Vienna? Here are five places The Local recommends you visit.