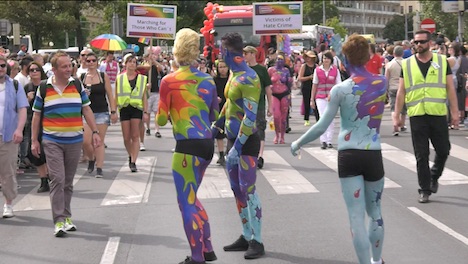 Lesbian, gay, bisexual, and transgender (LGBT) events involving thousands of people paid hommage in cities across Italy, as well as in Portugal, Bulgaria and the Lithuanian capital Vilnius.

At the largest, Vienna's “Rainbow Parade” involving some 130,000 people according to organisers, a minute's silence was held during the colourful 20th annual, anything-goes parade.

At the head of the procession was a black-clad group called “Victims of Hate Crimes – Marching for those who can't”, holding a rope around a empty space where normally a float would be.

The “ghost float” represented “those lesbians, gays, bisexuals and transgender and inter-sex people who lost their lives in Orlando and who can't be marching with us,” organisers said.

It was the deadliest in long list of mass shootings in US history, reigniting once again the gun debate in the United States ahead of presidential elections later this year.

Mateen was killed when police stormed the club. Officials say he pledged allegiance to the Islamic State group. But witnesses said he had frequented Pulse in the past and used gay dating apps.

Lui Fidelsberger, co-head of the Vienna Homosexual Initiative (HOSI), Austria's oldest lesbian and gay organisation, said the best answer was to be even louder and prouder.

“It is important that we don't allow ourselves to be scared or intimidated,” Fidelsberger said.

“The response must be more visibility and pride. And so despite the great sadness… this year's Rainbow Parade will again celebrate loudly and stridently a big festival of diversity.”

Security in the Austrian capital was tighter, however, with several hundred police on duty — more than last year because of the Orlando attacks, police spokesman Roman Hahslinger told AFP.

In Italy, tens of thousands of people took part in Gay Pride events nationwide, with 30,000 in Florence, 5,000 in Genoa and thousands more in Palermo, Treviso and Varese, organisers said.

In Genoa, the first procession float sported a large rainbow flag crossed with a black banner reading: “We are Orlando”.

The Palermo event's organiser, Massimo Milani, appeared at the parade in a white wedding dress splattered in fake blood and with a ribbon reading: “We will survive”.

In Lisbon, a parade of more than 5,000 people paid tribute to the Orlando victims, according to organisers, but with pumping music and extravagant costumes they still managed to have fun.

A large black banner at the head of the procession in the Portuguese capital carried the photos of the victims in Florida.

“Orlando proved the LGBT community is the victim of violence and discrimination. The first automatic reaction was fear but then came unity and the desire to combat hate,” said organiser Ana Aresta.

“This massacre has affected us all,” said gay rights campaigner Paulo Corte Real. “We are here to show our strength and to refuse all this hatred that we are still confronted with.”

Around 2,000 revellers, police said, took part in a Gay Pride event in Metz in eastern France. Local reports said a memorial was set up with the inscription “Solidarity with Orlando”.

Around the same number gathered in Vilnius while around 1,000 held a minute's silence at the Soviet Army monument in downtown Sofia, waving flags, some of them with the #weareorlando hashtag.

The Bulgarian crowd chanted “Stop Homophobia!” and “Happy Pride!” and was addressed by several foreign ambassadors, although numbers were significantly smaller than last year.

“There are fewer people this year but I would like to think that it's the scorching heat that is to blame and not fear after the Orlando tragedy,” said participant Ria Naydenova, 24. 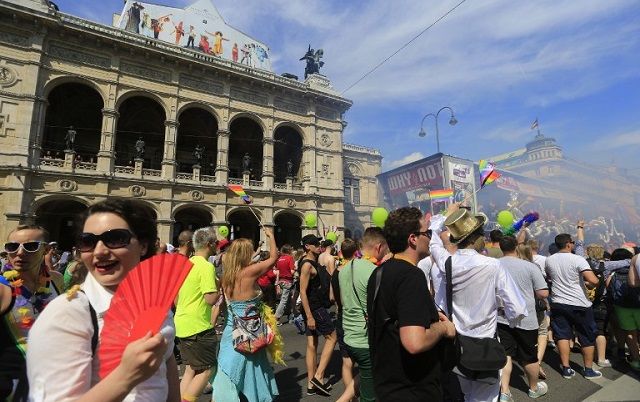 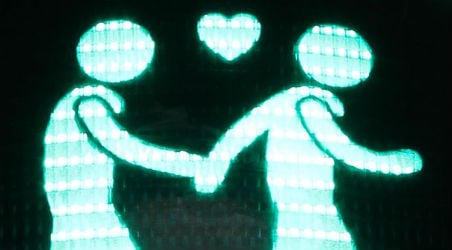