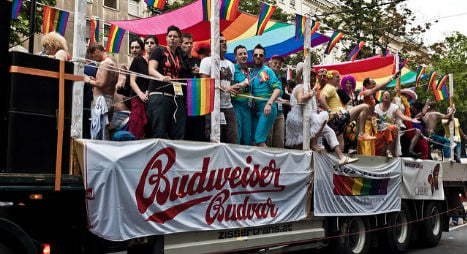 Vienna has recently gained momentum as a top LGBT tourist destination, something that is heavily endorsed by the Vienna Tourism Board.

“Over the past few years Vienna has grown into its role as a hotspot in Central Europe, which not only impresses with imperial flair and world-famous art, but also with exciting parties and excellent establishments for gay and lesbian people,” Isabella Rauter, a spokesperson for the Vienna Tourism Board told the Local.

She added: “What makes Vienna the perfect destination for gay and lesbian travellers is the impressive blend of historic splendor, culture, contemporary lifestyle and openness.”

The Rainbow Parade comes round every summer, when for a few hours the Ring is transformed into an arena for people fighting for equality and against discrimination towards members of the LGBT community.

This year's parade is taking place tomorrow. For those of you in town to join in with the celebrations, here are a few more things you can do.

1. Party all night long at one of the Rainbow Parade after parties

The club Hades, which usually hosts gay clubbing events every Friday, will also be hosting a Rainbow parade after party. It is located right by Karlsplatz in Vienna’s first district. Starting at 8pm right after the parade, the club is hosting an after show party. The three music trucks that will be present at the parade will give you a taste of the evening to come. Dance the night away to an international  line up of DJs including SINISA TAMAMOVIC (UK), DJ RICH (IT), SIKZTAH, AKOS VEECS, and FOXY. For those of you who do not want to miss the Austria – Portugal game, do not worry as they offer a live stream of the event on the 2nd floor.

2. Have breakfast or lunch at Café Berg:

Café Berg was founded 19 years ago as the first gay and lesbian day café in Vienna. It prides itself in having become an integral part of Vienna’s LGBT scene. You can find the café in the ninth district of Vienna near to the Sigmund Freud museum.  Tripadviser reviews describe it as a great place to eat near the centre of the city and say that the atmosphere is very friendly and relaxed. So if you are in town for the parade, why not stop by for a quick coffee or some lunch.

3. Browse the thousands of books at the Löwenherz Bookstore

Right next door to Café Berg is the lesbian and gay bookstore Löwenherz, advertised as being one of the largest gay and lesbian bookstores in the world. So if you have a free afternoon while you are in town or it is raining outside, why not drop in at the bookstore and look through the thousands of books they have to offer. Not a book fan? No problem they also offer a range of gay and lesbian films. Since it is quite a popular place for the LGBT community, they suggest stopping by to find out more about the scene in Vienna and getting flyers and information about it.

4.  Get some R&R at the Kaiserbründl Men’s Sauna

A permanent feature on Vienna’s gay scene, the sauna not only offers a relaxing wellness experience but also a step into Vienna’s elegant bathing house history.  The Sauna is said to be the oldest and most well-established bathing establishments in Vienna and known for having famous guests such as Archduke Ludwig Victor, who was the youngest brother of the Emperor Franz Joseph I. The sauna has a bio sauna, a steam room, a solarium and a restaurant and offers massages.

5. Dance to disco classics at Why Not club:

Located at the very centre of Vienna, the club was the ultimate insider tip among the gay community in the 1970s. It changed its named from Brückenstube to Why Not in 1979 and is still said to be the only fully gay club in Vienna. The club has three different bars and a small dance floor and is only open on weekends and before public holidays. Although gay disco classics are regularly on the set list, they offer music for every taste.  They are also hosting an event on Saturday after the pride parade with free entrance between 9-11pm.