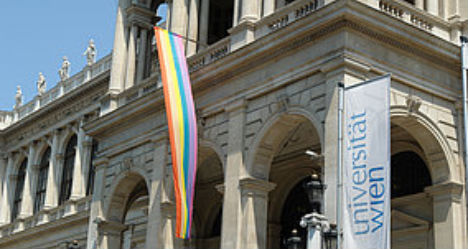 One of the couple – using the fake name Moni – told Vice magazine that she had met her girlfriend in the entrance to the university and they had greeted one another with a kiss and a hug.

After sitting on the steps and kissing and comforting her girlfriend, who was going through a stressful time, she said they were then approached by a security guard.

Thinking she was going to tell them to stop sitting on the steps, Moni asked if everything was OK and the guard reportedly replied: “No, actually not. This is a public space and what [you] are doing is not actually very sexy.”

The woman then apparently told them that the other security guards did not want to see that any more.

The incident was first tweeted about by Twitter user Lena (@lenrustotalus) who wrote: “Were two kissing women told to stop by a guard because ‘it does not look sexy’?”

A spokesperson for the university told Vice that they were investigating the incident but reaffirmed the pro-LGBT position of the university, referring to the rainbow flags hung outside the university.

“If this incident really happened, it is definitely an isolated case,” they said.

It comes as Vienna celebrates a week of gay pride ahead of the Rainbow Parade taking place this Saturday.

Although Vienna is generally celebrated for its openness and tolerance towards LGBT groups, the city has not been without some controversy when it comes to gay and lesbian kisses.

In 2015 thousands protested in Vienna after a lesbian couple were told to stop kissing in the city’s popular Cafe Prückel by a waiter who then refused to serve them.

According to the couple, the cafe manager Christl Sedlar barred them, reportedly saying “diversity such as this belongs in a brothel, not in a traditional coffee house”.

The manager later said the cafe’s reaction had been “excessive” but argued that the couple were “canoodling”.

In March 2016, a gay couple were attacked by a taxi driver after they kissed while sitting on the back seat. The driver had reportedly said: “I don't want anything gay like that in my car.”

When one of the men pointed out that he needed to be a bit more open in his view of the world, he had then shouted: “People like you need to be shot.”

He then punched the 27-year-old in the face, and only stopped his verbal and physical attack when police arrived. He is now being investigated for assault.