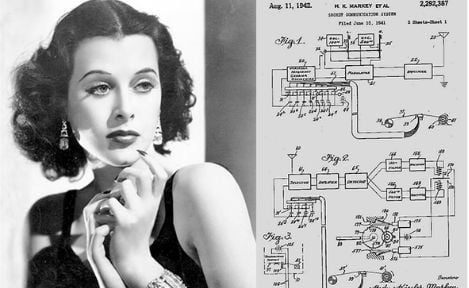 Few people know, however, that she also invented a communication system used in the cold war that paved the way for wireless phones and WiFi.

A campaign spearheaded by her son Anthony Loder, 68, is now fighting to change the image of her as just a pretty face and ensure that everyone remembers her as a revolutionary inventor.

He is currently raising $9000 (approx.€8000) to help pay for a monument that has been erected at the Vienna Cemetery in her name last week to mark the 75th anniversary of an important technology she patented.

Sixteen years after her death in 2000, Loder commissioned Christian Thomas to create a grave marker to honour her work. The commission was a series of 88 balls on stainless steel rods, which resemble her invention known as 'Frequency Hopping'.

“Please help celebrate the life of this remarkable woman who changed the world. Together we can remember Hedy Lamarr as more than just a pretty face,” the campaigners wrote on the fundraising page.

So who was Hedy Lamarr and how did one of Austria's most successful Hollywood actresses end up inventing technology critical for cold war communications?

The Life of Hedy Lamarr

Hedy Lamarr was born to a Jewish family in Austria Hungary on November 9, 1914. She was discovered by Director and Producer Max Reinhardt in the late 1920s and had a brief acting career in Germany and Austria. In 1933 she starred in a controversial film entitled Ecstasy, in which she was featured nude and in sex scenes.

In the same year she married Friedrich Mandl, who was reputed to be the third richest man in Austria at the time. He was also a weapons manufacturer and dealer, who had ties to several of the fascist leaders at the time, such as Hitler and Mussolini who attended many of his parties.

Lamarr described him as controlling, jealous and as someone who disapproved of her acting career especially her film Ecstasy. It was through him and his meetings about military technology that her interest in Applied Sciences first emerged.

Unable to deal with his controlling nature, she fled to Paris disguised as a maid. There she met MGM head Louis B. Mayer and he offered to bring her to Hollywood. She would later use her influence as an actress to rescue her mother from the Nazis and also bring her to the States.

Mayer promoted her as the “world’s most beautiful woman”. He also suggested she change her name to Hedy Lamarr because at the time she was known only as “the Ecstasy Lady” following the controversial film. She landed her first American film “Algiers” in 1938.

She starred in many films throughout the 1930s to the 1950s, but was always typecast as the glamorous seductress of exotic origin. She had very few lines and she was reportedly bored by the lack of acting challenges. This was when she took up inventing.

During one of her evenings inventing, she designed the secret communications system known as “frequency hopping”, with the help of composer George Anthell. The technology prevented radio transmissions from being intercepted by enemy countries.

They received a US patent for the invention on June 10th, 1941, however the US military dismissed the invention, as it did not come from someone in the military. It was discovered years later, after the patent had expired, and used by the US Navy during the Cuban Missile Crisis. Later it would become one of the paving stones of modern communications technology, such as Wi-Fi networks, Bluetooth technology and a US Space command Milstar Satellite System.

She received little recognition for her invention, but instead remained famous only as the beautiful actress who played the seductress on screen. Due to the expired patent, she never received a single cent for her invention.

In her final decades, she struggled with her declining fame and filed a number of lawsuits for unauthorised use of her name and the spread of what she called unfounded rumours.

She isolated herself from the world and turned down a number of roles she deemed not challenging enough, eventually retreating to Florida in 1981 when she began to lose her eyesight and no longer went out in public. She died from natural causes in 2000 and her ashes were both buried in Vienna Central Cemetery and scattered in the Viennese woods.

Although she was inducted into the National Inventors Hall of Fame in 2014, many still do not know how important her contribution to science was. Loder wanted the memorial erected to ensure she is remembered as more than just a beautiful actress but he is unable to pay for the memorial himself as his health is failing, according to the fundraising site where donations can be made.