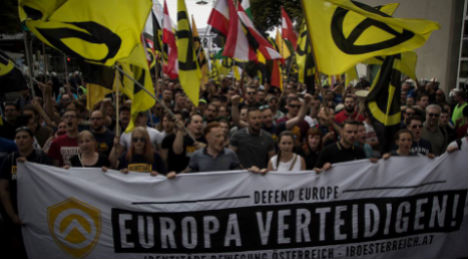 The Austrian branch of the Identitarian movement – Identitäre Bewegung Österreich – took to the streets at the weekend in protest against refugees and immigrants, chanting slogans such as ‘Our Flag, Our Country’.

Between 800 and 1000 right-wing protesters from Austria, France, Germany and Italy clashed with a similar number of counter-protesters from anti-fascist and left-wing groups.

Before the march Identitäre had posted rules online for the participants to follow, including banning the showing of right-wing extremist tattoos and clothing.

Now the group say they are bringing a case against the ORF’s main evening news broadcast Zeit im Bild for describing them as right-wing extremists and neo-Nazis.

“Patriots faced violence and murder attempts while exercising their democratic rights, to only then be insulted by politicians and media as neo-Nazis and right-wing extremists,” said their spokesperson Patrick Lenart.

Following the march, one member of the right-wing group was arrested for alleged neo-Nazi propaganda activity.

Thirteen people were injured during the clashes between left and right-wingers, including four police.

Seven of the left-wing protesters – who started throwing rocks, fireworks and bottles – were arrested for a variety of public order offences.

The march was the latest in a run of protests organised by the right-wing group.

A few days earlier the Carinthian branch of the group had stormed into a lecture on asylum at a university in Klagenfurt dressed up in burkas and middle-ages costumes.

The group then proceeded to carrying out a pretend ‘stoning’ on a member who they said was dressed to represent an Austrian patriot.

Previous attacks have included throwing fake blood onto an audience watching a play performed by refugees, interrupting the play by unfurling a banner saying “multiculturalism kills”.