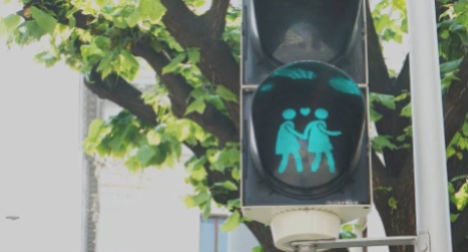 The idea has since been enthusiastically picked up by other cities around Europe and Munich, Hamburg and Frankfurt and now fans can also ‘get the t-shirt’.

T-shirts and other merchandise featuring the gay and lesbian traffic light couples are going on sale from today in a pop-up store on Schmalzhofgasse in Vienna's sixth district.

The city sold similar t-shirts during Eurovision last year but the chances of getting one were slim as they sold out almost immediately.

But if you want one, you will have to hurry as the pop-up shop is only open until June 18th.

Although widely celebrated as a sign of tolerance and equality, the lights are not without their controversy.

The right-wing Freedom party (FPÖ) lodged a criminal complaint against Vienna council member Maria Vassilakou, after the new pedestrian crossing lights were introduced around the city.

Party officials argued the lights contravene traffic regulations and, at a cost of €63,000, are wasting taxpayers’ money, although officials disagreed and opted to keep them.

After they were introduced to Linz, they were temporarily taken down after a local FPÖ politician there also objected on the grounds that “traffic lights are for traffic and should not be misused to impart advice on how to live your life”.

The city reinstated the gay-themed traffic signals after the local council voted to overrule opposition.”.