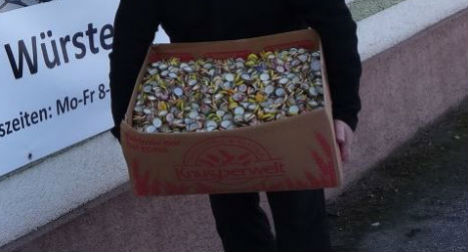 Hans Heiland collected the bottles tops over five years and will now sell them to raise money for a family who had recently lost a family member.

“The family suffered a loss in January, the husband died of a heart attack at only 32 and there are three very small children here.  The family has also recently bought a house and therefore has significant debt so I thought I would donate the project,” said Heiland, speaking to The Local Austria.

Heiland first had the idea of collecting beer bottle tops when he went to a festival. “I noticed that so much was being thrown away and decided I was going to start collecting for a good cause,” said Heiland.

He started with only a few hundred bottles caps but now has 10 million. He started receiving them from all over Austria and Germany, once word of his plans started circulating.

As the collection now weighs several tons, he stopped collecting more bottle tops in mid May. He will now sell them to a scrap dealer for €1,500.

First they will be displayed at a benefit performance during the summer night festival organised by the volunteer fire department in Oberholz, a town in the district of Amstetten.

At an event taking place tonight the money raised from the bottle caps and a contest at the charity event will be donated to the family in need.