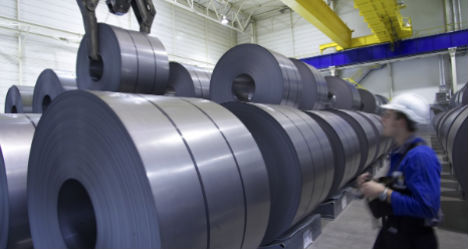 Investors cheered the results which beat analysts' forecasts. Shares in Voestalpine, which specialises in steel used in the rail, automobile, aviation, home appliances and oil and gas industries, jumped 5.5 percent on the Vienna stock exchange in early trading.

Chief executive Wolfgang Eder said the results showed that its focus on “technologically and qualitatively sophisticated market segments” was the right strategy.

Profit after tax rose by 1.2 percent to €602 million for the fiscal year running from April 2015 to the end of March, on sales that dropped 1.1 percent to €11.1 billion, the company said in a statement.

The company said there had been “an economic environment made extremely challenging by the dramatic slump in the oil and natural gas sector and global price deterioration for steel commodities, primarily due to enormous overcapacity in China”.

China produces more than half of the world's steel and is accused of flooding the market with products sold below cost in violation of global trade rules.

Angry steel manufacturers have urged the EU, the second-biggest steel producer, to follow the United States in punishing China with harsh tariffs.

Voestalpine said it was pencilling in an operating result that “at least approximates the figures of the last business year” for the coming year as it eyes indications that the economic situation will recover slightly over the year.

“The continuing strong performance of the automotive industry as well as the railway and aerospace sectors is definitely a positive factor,” it added.

The company employs some 48,500 staff and operates in 50 countries.