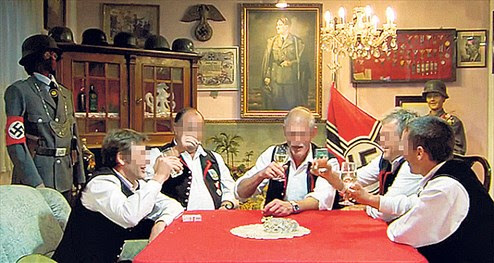 Photo: Screengrab from trailer of 'In the Basement'

The sale of the Nazi items – described as a “no go area” by one Viennese auction house – are due to take place on June 18th at the Munich auction house Hermann Historica.

Another macabre item to be auctioned off is Nazi Commander of the Luftwaffe Hermann Goering's brass container for the hydrogen cyanide phial used for his suicide two hours before his scheduled execution on October 15th, 1946.

The items are from the collection of the American doctor John K. Lattimer, who served as a medical officer during the War Crimes Trials in Nuremberg.

Ernst Kaltenbrunner, who was born in Upper Austria in 1903, rose through the ranks of the SS to eventually become the Chief of the Reich Main Security Office (RSHA) in the Nazi government.

He was the highest ranking SS officer to be trialled at Nuremberg, where he claimed he had nothing to do with the atrocities, despite evidence showing he participated in many instances of war crimes and crimes against humanity.

A spokesperson for Vienna’s Dorotheum – the largest auction house in the German speaking world – told the Kurier: “Nazi objects are a no-go for us. A topic like this is always borderline.”

Writing online, the German auction house defended the auctioning off of Nazi memorabilia, which is said helps to improve “understanding of that period” and helps ensure nothing like that can happen again. “A taboo of this part of history would only lead to a non-transparent market,” they write.

In 2014 two Austrian politicians were forced to resign after a film emerged of them singing and drinking while surrounded by Nazi memorabilia, including a photo of Hitler on the wall.

The 58-year-old owner of the basement  in Mattersburg, Burgenland that appeared in the film from director Ulrich Seidl received a suspended sentenced of ten months for his collection of Nazi flags with swastikas on, army uniforms and other memorabilia.

He was found guilty on two counts of breaking the Prohibition Act, which aims to suppress any potential revival of Nazism. In the film he described the Hitler portrait as the “most beautiful wedding gift I ever received”.

The two politicians had claimed they were being paid as extras, although Seidl said this was not true and they were just “trying to save their skin”.