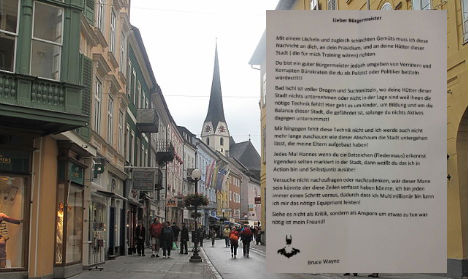 The original letter addressed to Bad Ischl mayor Hannes Heide, penned by Batman’s everyday citizen identity Bruce Wayne, criticised the “guardians of the city” for not taking enough action against drug use and addiction.

‘Batman’ went on to praise the mayor but wanted to let him know he is now he is “in action and carrying out vigilante justice” in the small Austrian town of 13,000 residents.

After Heide posted it online, Austrians quickly got to work coming up with the funniest memes and jokes about their local superhero.

The mayor then announced ‘Batman’ contacted him via e-mail on Monday to tell him now “it gets serious”, according to Heute.

Although in the second letter the small town superhero admitted there has already been an impressively quick clean up of the streets of Bad Ischl, in the picturesque lake region of Salzkammergut.

“The letter says that in the last few days Batman has established that Bad Ischl has already seen some good changes,” said Heide to Vice magazine. “He said that since the media reports over the weekend the corrupt cops are already more reasonable and the junkies are more considerate about what they are doing.”

The mayor said that there are some suspicions about who is behind the letter, with one suspect being a local resident known for being a “giant Batman fan”, although this man is no millionaire as the letter claimed.

In his latest letter, the local hero added that this is the last the mayor will hear from him but told him he is “now active”, although just what that means for the residents of Bad Ischl remains to be seen.