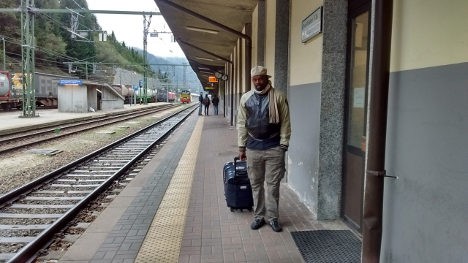 Moussa, a 37-year-old from Mali, waits at Brenner station everyday in the hope that the kindly guard will finally let him board a train to Munich.

He arrived in southern Italy by boat via Libya eight months ago, before making his way to the northern border with Austria in the hope of eventually being able to join his brother in Germany.

Clutching his only form of identification – a piece of paper proving he has a permit to stay in Italy – he said he sometimes spends the night on the station floor.

“My brother managed to get from here to Germany about five months ago,” he told The Local, just after being prevented from getting on the Munich train, which passes through Austria, on Friday afternoon.

“He keeps telling me to go to Germany. It's better for work there,” added Moussa, a mechanic by trade. “I can stay here, but it's impossible to work.”

His brother’s unhindered journey came before Italy was forced to send extra guards to reinforce patrols at the Alpine Brenner Pass crossing point after Austria threatened to step-up anti-migrant controls.

Austria, which last year accepted 90,000 asylum requests, hinted at building a 375-metre long fence unless Italy stemmed the flow of migrants. The threats to raise the boundaries sparked protests from pro-migrant activists. Fearing the impact on trade – the historic Brenner Pass is a crucial lifeline for exports to northern Europe – Italy was swift to react, eventually leading Austria to back down on its threats on Friday.

“He has no passport, if I let him cross into Austria he’d immediately be sent back,” the train guard told The Local.

“He has a permit to stay in Italy, I can’t let him pass.”

The guard added that while other migrants still came to the station each day, the number had dropped significantly in recent weeks.

Before then, most would make their way up to Ventimiglia, in the hope of crossing over to France. That was until French authorities effectively ‘closed’ the border, forcibly removing people from trains and carrying out stringent checks of cars and even mountain paths.

Exacerbated by its own influx, Austria has also sent hundreds back to Italy.

A centre, capable of hosting 70 migrants, was set up in Brenner last year as it became a prominent transit hub.

“The centre assisted 17,000 people over the course of the year,” the mayor of Brenner, Franz Kompatscher, told The Local.

But few of those people stayed in the town, he added, admitting he had “no idea” where the rest end up.

“Some wait in Brenner, but for the most part, they don’t stay.”

Under a government plan, South Tyrol, which has a population of 511,000, must take in 0.9 percent of the total number of migrants who seek asylum in Italy.

As the measure got underway last year, migrant centres were hurriedly built across the region, with the majority being housed in the city of Bolzano. Apart from Brenner, other centres, managed by the charity, Caritas, have sprung up in Vipiteno, Malles, Tesimo, Vandoies, Val di Vizze and Brunico.

But the arrivals have created social challenges, with some 240 asylum seekers sleeping rough on the streets of Bolzano, according to recent reports in the local press.

Meanwhile, migrant arrivals have sparked “a war among the poor” in Vipiteno, local businessman Roberto Giordani told The Local.

“Until a couple of years ago, there was no Caritas here,” he said.

“Now around 300 families in Vipiteno depend on it. But there is resentment over the €35 a day that goes to each migrant.”

The patience of locals, especially in Bolzano, has also been put to the test. In late December, the prestigious Museion Bozen-Bolzano turned off its free wifi because the service was attracting too many migrants.

And although few are in Brenner, residents there are worried that the summer could bring more than the area can handle.

Italy last week eclipsed Greece in terms of migrant arrivals for the first time since June 2015, with 8,370 landing in April alone.

“People are generally open in this region – but only up to a certain point,” Kompatscher said.