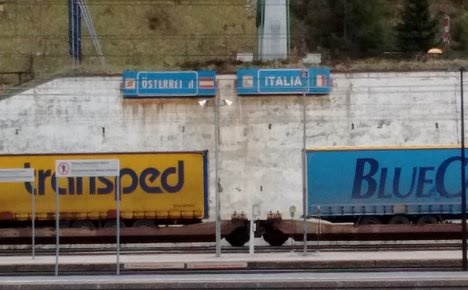 For Franz Kompatscher, the mayor of the South Tyrolean town of Brenner, the friction between Italy and Austria over refugees not only threatens to exacerbate the dilemma, but also open up old wounds.

“Even just talking about building a fence and making boundaries hurts us deeply,” he told The Local.

Kompatscher, who was born among the pristine surroundings of Colle Isarco, a hamlet nestled in the mountains close to Italy's northern border with Austria, can put his mind to rest. For now. On Friday, Austria, which ceded the southern part of Tyrol to Italy after the First World War, said it would no longer seek to bolster anti-migrant checks at the Alpine Brenner Pass, a major European transport corridor and crucial lifeline for Italian exports to northern Europe.

The decision came after weeks of terse exchanges between the two countries. Italian Prime Minister Matteo Renzi said the plans went “flagrantly” against EU law, while Austria, which accepted 90,000 asylum requests in 2015, told Italy to stem the flow of migrants across the frontier, or else a 375-metre fence would go up.

The hardline approach was effective: Rome dispatched over 100 extra guards to patrol the crossing point, while train checks at Brenner station have been reinforced – a move that led to a marked drop in migrant numbers, and to Austria backing down.

“There are still migrants who come every day and try to board trains to Innsbruck, but not as many as a few weeks ago,” a guard at Brenner told The Local on Friday.

Though Kompatscher sympathizes with Austria, whose population, at 8.74 million, is smaller than the northern Italian region of Lombardy, over the refugee burden, the uncertainty surrounding the country’s political future is making him nervous.

Chancellor Werner Faymann quit last week, two months after saying Austria would no longer be a “distribution hub” for refugees and just weeks after the right-wing Freedom Party (FPÖ), led by Norbert Hofer, triumphed in the first round of the presidential election.

“We hope that this decision remains in place,” Kompatscher said.

“We expect things to stay calm for the next few weeks, or two months. But everything could change. We don’t know yet what will happen to Austria’s government. The summer will also inevitably bring more migrants – it’s not a problem that’s going to go away anytime soon.” Last summer, Brenner became a transit hub for migrants who arrived by boat in southern Italy before travelling north, with many crossing over to Austria unchallenged.

Meanwhile, Italy last week eclipsed Greece in terms of migrant arrivals for the first time since June 2015, with 8,370 landing in April alone.

With fears of a summer revival, Austria is now trying to drastically decrease the number of asylum claims in 2016 after processing 90,000 – the second-highest among EU states per capita – last year.

“What will happen after that? For us, it’s a concern.”

The threats to raise a boundary at the Brenner Pass, 21 years after customs and immigration posts were removed, were not just empty words: on Friday, hours before Austria’s announcement, men could be seen preparing what The Local was told were areas allocated for prefabricated buildings to accommodate checkpoints. Austria said such preparations would continue as a precautionary measure – that is, if Italian migrant checks fall by the wayside.

But apart from the risk to trade and tourism in the predominantly German-speaking South Tyrol, the idea of a “fence”, even if intended figuratively, has triggered angst among the population of 511,000.

Many still struggle to accept the fact that the region is part of Italy, with several calls made in recent years, from both sides of the border, for a referendum on reunification with North Tyrol. The most recent came from Austrian right-wing leader Heinz-Christian Strache.

When a line was drawn between the two in 1919, a formerly united province, which had been part of Austria for five centuries, was thrown into disarray, paving the way for several turbulent decades.

Not only was the area forcibly Italianized under Fascist dictator Benito Mussolini’s rule, a pact between him and Adolf Hitler saw many forced to move into the German Reich and renounce their homeland.

Terrorism marred much of the 1960s, as activists sought for the region to be handed back to Austria. It has only been since 1972, when the region was granted autonomy, that it has been relatively peaceful, and prosperous.

But it has only really been since 1995, when customs controls were done away with at the Brenner Pass, often hailed as a symbol of successful European integration, that the South Tyroleans have felt more at ease.

“It was a joyous moment,” Kompatscher said.

“We feel Tyrolese; the idea of building a fence to our fatherland again stirs a lot of emotion. We hope it never comes true.”