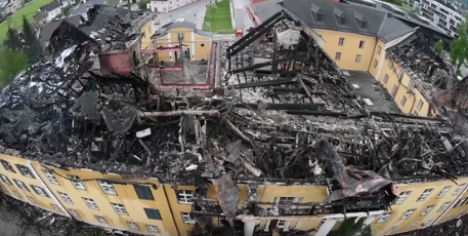 The enormous fire in Schloss Ebenzweier, which has been used a school since 1986, started on Monday but fire services were still putting out the last of the embers on Wednesday.

The operation involving 27 fire service teams with 500 helpers from around the region took 51 hours in total. Due to strong winds, over 90 percent of the roof was eventually completely destroyed by the flames sparked from a cigarette thrown away in the mansion’s rose gardens by an unknown person.

All school children and teachers were evacuated and nobody was injured in the fire. The school will remain closed until May 18th, when alternative accommodation will be found, possible in nearby schools.

The palace, which was a royal seat as early as the 13th Century, and was renovated into its current style in 1842 by the Habsburgs before later being passed down to the Bourbon family.

It was then handed over to local authorities in the town of Altmünster in the 1970s before being rented out to the vocational school.

“What comes next is the question of how big the damage is and what can conceivably be preserved in this historic building,” local government representative Thomas Stelzer told Oberösterreichische Nachrichten.