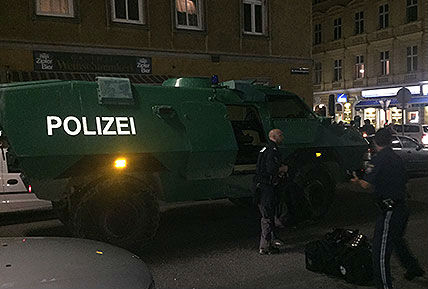 The Identitarian group had registered the vigil with the police, and said between 50 and 100 people would attend. In the end, only three people turned up, and organisers tweeted that the event had been cancelled.

However, a group of left-wing activists had heard about the planned vigil and around 120 people turned up at Yppenplatz to protest. “The counter-demonstrators surrounded the three Identitarians. There were reports that they had baseball bats and firecrackers,” police spokesman Paul Eidenberger said.

Police armoured vehicles, a helicopter, special forces officers, and dog-handler teams were dispatched to the square in Vienna’s 16th district. There were no reports of any injuries, although police said they were attacked by some of the protestors.

Eidenberger said that between 50 and 100 officers were deployed. “We knew that a large crowd had gathered and there were reports that some people were armed. We had to use a lot of manpower, even if now it looks like an exaggerated response. The aim was to prevent damage to property, personal injury, and to keep the streets quiet. Luckily the whole thing was peacefully resolved,” he added.

Many of the left-wing protestors quickly disappeared down side streets and into local bars. Two people were arrested.

Tom Müller, a spokesman for the left-wing group NoFascism, said that the spontaneous counter-demonstration was a success. “We succeeded in preventing a far-right vigil and public appearance by right-wing extremists in the district,” he said. He added that the planned vigil was a provocation and an attack on the district's alternative and migrant-dominated community.

A Kenyan man has been remanded in custody for allegedly battering 54-year-old Maria Eschelmüller to death with an iron bar in the early hours of Wednesday morning, in what was apparently a random attack.

The 21-year-old suspect is homeless, and arrived in Austria aged 14 on a tourist visa that has long since expired.

Eschelmüller’s husband said he plans to sue the Austrian government, as the man was known to be violent and police say he had been charged with various offences in the past.

“Everyone on Brunnenmarkt knew this man and knew that he’s dangerous. The police knew him and knew his location. Why did they not take him somewhere where he couldn’t harm anyone?” he told the Krone newspaper.