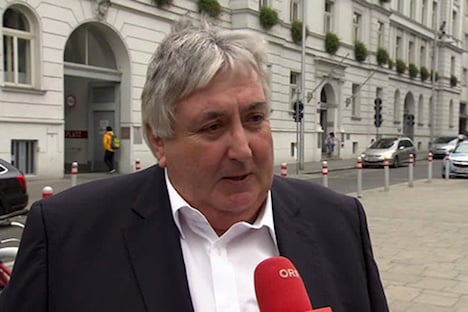 But last year this socialist utopia became the first part of the Austrian capital to be run by the far-right Freedom Party (FPÖ), the populist movement turning politics on its head and whose candidate is tipped to become president on May 22.

In last month's presidential election first round, the FPÖ's Norbert Hofer came first with 35 percent of the vote nationally, and in Simmering 41.2 percent, against just 16.5 percent for Rudolf Hundstorfer of the Social Democrats (SPÖ).

Paul Stadler, since October the FPÖ head of Simmering council, is no fan of mass immigration, of Muslim “parallel societies” or “economic migrants” taking jobs from Austrians.

“Austria is still a Christian country, and at the moment it looks like we are being overrun by Islamism,” Stadler told AFP. “We have 500,000 unemployed. The more we take in, the harder it is to deal with the native inhabitants.”

But, he says, such matters are “for the television”. His job as a local politician is to deal with day-to-day concerns like public transport — something the left forgot how to do.

“The SPÖ were very arrogant. They didn't listen to the people any more, they governed over their heads,” Stadler said in his office in Simmering town hall. “We talk to the people, find out what the problems are and deal with them.”

'The boat is full'

But for locals in Simmering — which with its clean streets and well-equipped playgrounds is a world away from the likes of France's rundown “banlieues” — it is clear that immigration is a major concern.

Last year, 90,000 migrants claimed asylum in Austria, the second-highest per capita in Europe, while around 10 times that number passed through. The flow has slowed to a trickle now, but many Austrians fear it may resume.

“I think in Austria the boat is full,” Nicole, 24, told AFP as she smoked a cigarette in Simmering. “With all these stories about women getting raped, I am scared to take the metro late at night.”

And it's not just those born in Austria. Lucia Matic, 40, a dental hygienist originally from Croatia living in Austria for 20 years, says it's “no longer safe here like it used to be”.

“I am a foreigner too of course, but there are too many different foreigners,” she told AFP. “Lots of them don't want to integrate… We (from the former Yugoslavia) really made an effort.”

“It is outrageous the possibilities that they (the new arrivals) have. They don't even have to go out and work… I am a foreigner but I have been working hard for years,” echoes hair salon owner Fatima Erol, 26, originally from Turkey.

“Lots of foreigners vote for us,” Stadler said.

Writing on the wall

Chancellor Werner Faymann's SPÖ, with the centre-right People's Party (ÖVP), have governed Austria since World War II and form the current governing “grand coalition”. But the writing has long been on the wall.

At the last general election, in 2013, they only just scratched together a majority. Now, the FPÖ is leading opinion polls with over 30 percent, the SPÖ and the ÖVP with less than 50 between them.

In October in Vienna, the FPÖ came second in elections with its best-ever score. It is unclear how long the SPÖ will run the capital, as it has done — hence its “Red” epithet — since 1919, apart from during the Nazi era.

For Julia Herr, 23, head of the SPÖ's youth wing Socialist Youth, whose members last Sunday booed the under-pressure Faymann, the success of the far-right is all the more galling because she says its claims to represent ordinary people are rubbish.

“We need a radical change of style,” Herr told AFP. “We need to get away from this issue of asylum which has been dominant for so long… We have to stop copying the FPÖ.”

Back in Simmering though, pensioner Hermann Ertel remains to be convinced as he strolls through the listed Weissenboeckstrasse estate, built by the SPÖ for the workers in the 1920s.

“I only vote for the SPÖ really because my son works for them,” he said wearily. “They always make promises and in the end things just stay the same… They take us for idiots.”