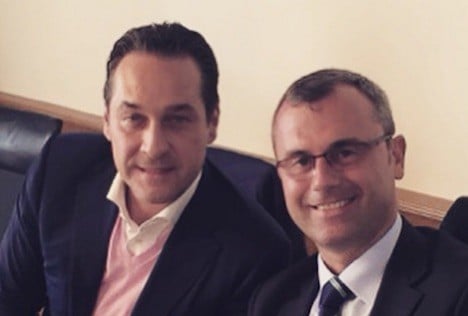 The homeless man, who was reportedly in Austria illegally, allegedly battered a 54-year-old woman to death with an iron bar in the early hours of Wednesday in an open-air Vienna market.

The 21-year-old suspect is known to be violent and had been charged 18 times with various offences, according to police. He arrived in Austria aged 14 on a tourist visa that has long since expired.

The far-right Freedom Party (FPÖ), whose candidate is the bookies' favourite to be elected president in the May 22 run-off, has jumped on the case to charge that the government has lost its grip.

There has also been a number of highly publicised suspected sexual assaults by migrants, including an alleged rape of a Turkish student by three Afghans last month in a public toilet in Vienna.

Chancellor Werner Faymann, whose future is already highly uncertain after his party's candidate was knocked out of the presidential race, said on Friday the government would tackle criminality among migrants.

“I see that uneasiness is growing and I understand the fears,” Faymann said. “We need to tackle an increasing polarisation in the population and the spread of prejudice.”

A package of measures to be presented next week will include “consistent” deportation of failed asylum-seekers and more police on patrol, Faymann said.

He added however that far-right crime was also on the rise and that migrants “who want to integrate and need our protection should not be tarred with the same brush as those who are violent or criminals”.

In an example of far-right incidents, police said Friday that a 46-year-old Austrian has been arrested for allegedly placing two pig heads on an Islamic centre and mosque being built in the southern city of Graz.

Last month the interior ministry said there was a 54 percent rise in extremist and racist incidents in 2015, ranging from vandalism and assaults to fanning hatred against foreigners.

Austria took in 90,000 asylum-seekers in 2015, making it the European Union's second-largest recipient per capita, while around 10 times that number passed through.

On April 24 FPÖ candidate Norbert Hofer came a clear first in the first round of elections for the largely ceremonial post of president with 35 percent of the vote.