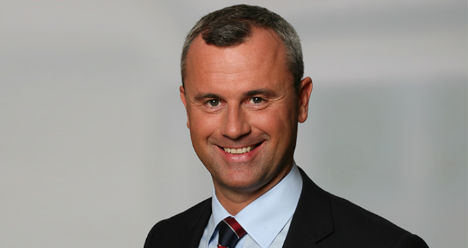 In an interview with domestic news agency APA, Hofer also said he would not refuse to appoint a mainstream candidate as chancellor and declared his attachment to Austria's membership of the European Union without ruling out a referendum on the issue.

In what Austrian media described as a political “tsunami”, anti-immigration Hofer romped to victory in last month's first round of the presidential election and is expected to win a run-off scheduled for May 22nd.

Hofer told APA: “I think that if we do everything we can to make sure the people who are already in Austria integrate themselves, it's still possible.”

Around 90,000 migrants have applied for asylum in Austria — some one percent of the population — and Hofer said that “nearly no other EU state” had made such a contribution.

But he told APA on Thursday that he would appoint a chancellor from the ruling Social Democrats (SPÖ), which did not even make it into the second round of the presidential election, winning just 11 percent.

This poor performance could cost the current chancellor, Werner Faymann, his job at a crisis meeting of the SPÖ expected on Monday and some have raised fears Hofer would refuse to appoint an SPÖ-nominated replacement.

However, Hofer told APA he would appoint an SPÖ leader as chancellor “whatever happens because it's in my interests that Austria is better governed.”

He also recalled that the Austrian constitution stipulates that the choice of chancellor falls to the “elected parties” in parliament, even though the president can in theory refuse to give the final green light.

Hofer needs to win over a more moderate section of the Austrian electorate if he is to beat his centrist rival Alexander Van der Bellen, who won 21 percent in the first round.