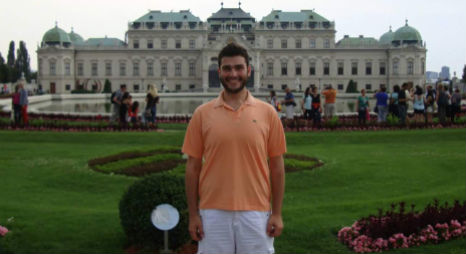 Since coming to Austria last December, I have come to understand the new clash of civilization that exists today between Europeans and immigrants. The current migrant crisis that Europe is facing has only brought to surface what most Europeans knew deep inside; we cannot just have a group of people from a certain culture who cannot integrate with the society. The problem comes down to the fact that the new immigrants often lack language skills. This language barrier pressures the migrants to live in areas where there are more immigrants than natives and fewer opportunities to practice German. The existence of some groups in Europe who reject migrants and even in some cases far right governments, also make it impossibly hard for refugees to integrate. Specifically with the rise of the far right in this beautiful country, I feel like it is my duty to show the true face of many Syrians.

I personally am ashamed to say that it took me four months until I decided to learn German, and now I am taking the A1 course along with several other migrants, who are not necessarily refugees. When I first came here to Vienna, I lacked motivation to do anything. I was missing my family, my friends and my entire social habitat in Beirut. The fact that I spoke English helped me a long way with getting everything done; even when applying for asylum, I was translating questions other asylum seekers had to the officer who spoke English. Yet, I was constantly ashamed that I didn’t speak German. When my housemates had friends over, they were forced to speak English if I was to understand their conversation. It was unfair of me, a guest in their country to impose on them to speak English all the time. They never had a problem with it, but for example, they often drifted in the middle of the conversation and started talking German, suddenly I lost the whole point of the conversation.

The reason I decided to mention the above personal information is because I believe this language barrier and/or unwillingness to integrate is, in my opinion, one of the main reasons why there is a rise in right wing sympathizers in Europe. It is understandable why new immigrants wouldn’t want to learn a new language or interact with other cultures. Though once the immigrant relaxes and overcomes the culture shock, he/she should show respect to the hosting nation by at least following the law and trying to learn the host language.

Governments are 'supposed to educate the masses'

When migrants, who never left their home country nor interacted with a lot of foreigners, come to a cosmopolitan region such as Europe, they will have a problem integrating. The blame is on the failed home governments that were supposed to educate the masses, and at least enforce proper second language training. Nevertheless, whether we like it or not, this is the situation today. There is a large number of uneducated migrants who may be skillful with their hands but have no willingness, no motivation or no ability to advance in learning a new language. However, those who lack the ability or motivation can be abetted by daily intensive courses and proper motivation.

In the first 6-12 months, asylum seekers do not enjoy the benefits of being recognized refugees, such as unlimited access to education and funding for language courses. Therefore, they often either choose to wait until they are recognized as refugees, or attend the once per week free language courses offered by NGOs.

Some asylum-seekers like myself who have a limited ability to pay for courses, can get discounts on intensive language courses in certain institutes, but we still have to pay 100 euros. A large proportion of asylum seekers cannot afford to pay this amount, therefore, they lose their initial motivation to learn the language. Once asylum seekers get recognized, they would have been in the host nation for almost a year without speaking the language. Why does the government discourage the asylum seeker from the opportunity to learn intensive German a month after his arrival?

The hesitance some European countries have regarding initial integration is understandable, namely because Europe doesn’t want all the migrants to stay. They have handpicked few nationalities that they wish to keep and others will be encouraged to leave. Reducing access to labour and cutting down the opportunity to learn the language and integrate could be enough motivation for a tired migrant to decide to go home.

A 'problem of unwillingness'

On the other hand, there is the problem of unwillingness. Some Syrians that I have come across who have been in Austria for anything between 1-4 years, have not advanced further than A2 level in German, which is only the second of six levels to mastering a language in European standards. The problem is that A2 enables one to communicate very basically, but it won’t give one the ability to work in a decent job and talk extensively about issues. So the result is, as is the case with the Turks in German speaking countries, the migrant society will decide to stick together rather than integrate, and integration is the founding pillar of the EU.

The solution is motivation, education, and proper social interactions primarily for the youth. Many of the new migrants are fairly young, which means that they are flexible in their thoughts, and accordingly, if the host nation can properly motivate them, they will be able to enthusiastically participate in language courses and integrate. Migrants who have already successfully integrated into the host society also could play an advisory role in the integration of young newcomers. Plus, if young people from both cultures engage more with one another in activities and try to build a bridge between the cultures, it could end the clash, which may solve the integration fears shared by Europeans.

'Integration does not come overnight'

A portion of European people also have misconceptions about Islam and refugees. Although I am Christian I grew up in a fairly conservative Muslim country, and had a lot of Muslim friends who explained to me the true spirit of Islam. If an Arab explains to the European, the difference between a Muslim and a terrorist they will become more understanding or worst case they pretend to agree. The European people need to be reminded that the refugees in their countries today ran away from those terrorists, some barely escaped with their lives.

Lastly, once the newcomer has settled down and got over the cultural jetlag, they should leave their cultural restraints at home and force themselves to go and interact with their new host country and learn about them; or else they’re no better than the ignorant European right wing extremists. Not by abandoning one’s beliefs or heritage, but rather one should be more accepting of the other, one shouldn’t hold on too tightly to his opinions in a manner that disturbs the other. Integration does not come overnight, but it does succeed with cooperation from both sides. When migrants interact with the host nation, they can show that migrants are not something to be scared of, but rather they are people who want to become part of their new country.

Majd Nassan has a bachelor of Arts in political studies from the American University of Beirut (AUB). He will be starting his post graduate studies at the Diplomatic Academy in September. Additionally Majd founded “hand in Hand” a student-led project to aid Syrian refugees in Lebanon. Since graduating in December 2014, Majd interned for the Carnegie Middle East Center, and after worked as a research assistant at AUB until he came to Austria.