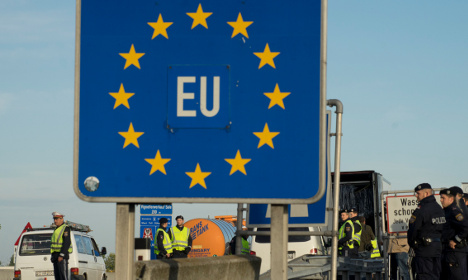 “I can confirm that we are having discussions with the EU Commission and our European partners about this,” interior ministry spokesman Karl-Heinz Grundboeck told AFP.

His remarks came after German media reported that several EU states were pressing Brussels to extend the temporary controls inside the passport-free Schengen zone for at least six months.

The EU allowed bloc members to introduce the restrictions as hundreds of thousands of migrants and refugees began trekking up the Balkans from Greece towards western and northern Europe last September.

Austria, Belgium, Denmark, France, Germany and Sweden have all clamped down on their frontiers as the continent battles its biggest migration crisis since the end of World War II.

However, the extraordinary measures — triggered in case of “a serious threat to public policy or internal security” — are now due to expire on May 12th.

“We request that you put forward a proposal, which will allow those member states who consider it necessary to either extend or introduce the temporary border controls inside Schengen as of May 13th,” the six countries said in a letter addressed to the EU, according to German newspaper Die Welt.

A source close to the German government told AFP the letter would be sent on Monday.

The European Commission, which did not comment on the matter, is due to give its verdict on May 12th on whether Greece has done enough in recent weeks to protect the EU's external borders.

In case of a negative assessment, the executive could give the green light for an extension of the border controls.

The influx of people fleeing violence and poverty in the Middle East and elsewhere has put a huge strain on the bloc's 28 members.

While the flow via the Balkans route has slowed to a trickle after countries shut their borders, governments fear that the migrants will seek out new routes into the EU.

More than 26,000 migrants have already landed on Italy's shores so far this year after setting off from Libya.

The arrivals have prompted Austria to announce plans to reinstate border controls — including a 370-metre (1,200-foot) fence — at the Brenner pass in the Alps, a key transport corridor between northern and southern Europe.

The move has sparked protests at the checkpoint in recent weeks and sparked tensions between Vienna and Rome.