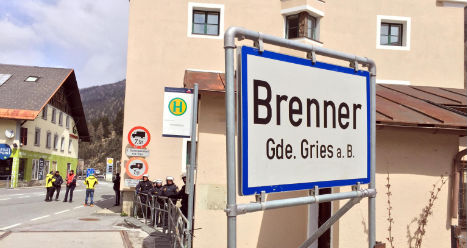 The head of Tyrol’s provincial police force Helmut Tomac made the remarks at a press conference on Wednesday, the Tiroler Tageszeitung newspaper reported.

The police chief said that whether a fence is erected depended on “the co-operation of the Italians”, reiterating a similar statement he made over the weekend.

The Brenner border pass between Italy and Austria has become a focal point in Austria’s increasingly hardline policy towards migrants in recent weeks, which has seen the country erect fences and increase checks at its borders.

Tomac has been overseeing building work at Brenner to reinforce facilities at the checkpoint and allow cars and larger vehicles to be channelled into different lanes so they can be checked by border police.

Rumours that Austria will build a fence in the area have been around for some weeks, although this is the first time the length of the fence has been mentioned.

A fence erected near the town of Spielfeld on the country’s southern border with Slovenia in February is 370-metres-long.

Austria’s new Interior Minister Wolfgang Sobotka confirmed over the weekend that continuous border controls will be introduced on the border with Italy at the end of May which he said are necessary “to continue to guarantee the security of Austria.”

He said then that a fence may also be erected along the border “if Italy does not introduce measures” to control the numbers at the border.

Speaking on Saturday, Tomac said they expect between 400 and 500 refugees a day at Brenner rather than the tens of thousands who arrived at Spielfeld last year.

He added then that whether a fence is erected depends on whether Italian authorities took measures to organise the refugees, for example by “sending them back again”.

“Then there is no need for a fence,” he said, quoted in the ORF.