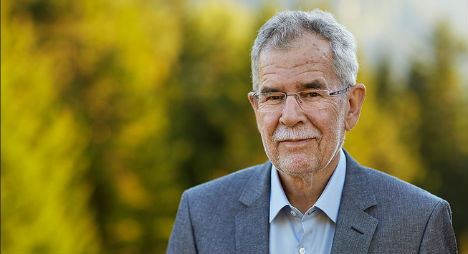 Alexander Van der Bellen will go against Norbert Hofer in election run-off in May. anderbellen.at/Wolfgang Zajc

Not achieving the 50 percent majority he needs to take the seat at the Hofburg, Hofer will now go head to head with the first runner-up Alexander Van der Bellen, supported by the left-wing Green party, in the run-off election on May 22nd.

What can be said with certainty is that the new President will not come from either of the two main parties – the conservative Austrian People's Party (ÖVP) and the Social Democrats (SPÖ) – for the first time since the founding of the Second Republic in 1945.

The result may have left some readers of The Local Austria unfamiliar with Austrian politics wondering what exactly the President does and what it would mean to have far-right or left-winger in the role. We asked political researcher Dr. Marcelo Jenny, from the University of Vienna's Department of State Government, to explain a thing or two.

What power does the President have in Austria?
A common interpretation is the President is an authority in reserve. It can in some way be compared to the Queen in Great Britain. The Austrian President probably has more of a busy daily schedule that the Queen but lots of the political power is symbolic power. The President swears in and dismisses the government. A lesser power is the hiring of officials, appointing titles, and things like that. There he can make a bit more of a mark.

How often do Presidents use their power?
Presidents are stronger the less they use their powers. If the President wags his finger daily about the government, he would lose his power. He can do that once in a while, make an appeal. In 1999/2000 President Klestil did not want the coalition between the Christian conservative ÖVP and the Freedom Party but could do nothing against it. But he did not appoint some FPÖ ministers for their stance on the EU, which was a big topic at the time, and had strong backing for that.

Could having a far-right or left-wing in the job change the role of the President?
[Hofer and van der Bellen] both made strong statements during the first round. Both were strong in the sense it would be hard to follow through with these powers. I don’t think a President wants to get into conflict with government. These would be large steps to take. With the hiring of officials and appointing titles, Hofer could perhaps sometimes use his power to say no I don’t want that person because of political patronage – he has more leverage to use his power there.

Hofer said during the campaign he would not appoint judges who wear headscarves. Would that be that allowed?
Yes that could be an instance where he could say no. But right now I can’t think of a situation where the SPÖ or ÖVP has a candidate that Hofer would be able to argue against appointing.

How significant is this recent result?
On a symbolic level the result is something unprecedented. It’s the best result ever for the Freedom Party in a major election. What I found astounding was the uniform pattern around the country. It is a major defeat for the two government parties. The main reason I think is the refugee crisis plus to some extent the economic and the EU crisis.

Is the Presidential election an indicator for national elections?
Voters today are quite volatile so it’s getting harder to argue using our experience from history. The two government parties will rebound somewhat in a national election because the issues will change. I don’t think they will get such a bad result. But it is possible the FPÖ will be the largest party.