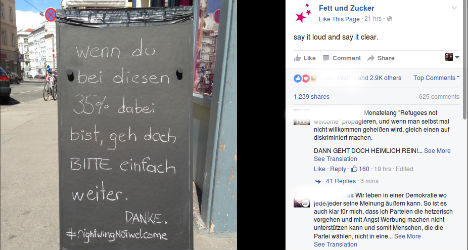 Critics of cafe owner Eva Trimmel have compared her action to those taken by the Nazis to exclude Jewish people from certain public spaces and establishments.

The barring of Freedom Party (FPÖ) supporters from the Fett and Zucker cafe in Vienna’s Leopoldstadt by Trimmel followed the unprecedented success the far-right party saw in Sunday’s Presidential election, when they came top with around 35 percent of the vote.

When she opened her cafe on Monday, Trimmel wrote on the A-board outside that any one who is “part of that 35%” should carry on walking past the cafe.

The hashtag #rightwingNOTwelcome was also written underneath and a picture of the sign was then posted on Facebook with the comment ‘say it loud and say it clear’.

The post has since been liked by nearly 3000 people and shared by 1000, although it sparked a heated debate in the comments, with some describing it as a “wonderful action” and others saying no one should be barred based on their political beliefs.

Commentator Philipp K. wrote underneath the post: “The same as 70 years ago! Then Jews were not allowed to go in, and now it’s blue[FPÖ]-voters!”

Trimmel has since defended her actions, saying: “I have positioned Fett und Zucker as a queer-feminist, anti-racist coffee house. I want no people with right-wing points of view to come in.”