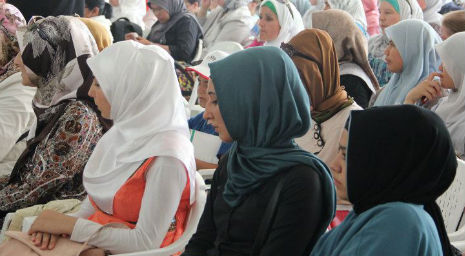 Around 95 percent of the incidents were aimed at women, according to the report presented by the Documentation Office for Muslims in Austria in partnership with the Islamic Faith Community in Austria (IGGiÖ).

The organisation documented incidents from December 2014 up to the end of 2015 and said they expect the number of assaults to increase in the future.

Around 40 percent of the reports related to verbal attacks, 12 percent were physical attacks on people, five percent were related to discrimination and three percent graffiti. Further incidents involved hate crimes or hate speech, and a quarter of the documented Islamophobia was aimed at Muslim institutions.

One incident involved a Muslim student being spat at the AKH hospital in Vienna by a pensioner and called a terrorist. In another, a five-year-old being picked up from kindergarten by her Muslim mother was spat at by a man who then imitated a machine gun with his hands.

The organisation said they have noticed a clear decline in the inhibition about attacking Muslims, which they framed in the context of the refugee movement.

Austria saw 90,000 asylum applications last year, with society divided over whether to welcome refugees and protest against accepting them. This year the country has set an upper limit of 37,500 applications they are prepared to accept and is now adopting a more hardline approach to its migrant policy.

The latest data follows statistics released by the Austrian Interior Ministry at the end of last year that confirmed the country saw a massive increase in xenophobic crimes in 2015.

Recent weeks have seen incidents involving the anti-Muslim Identitarian movement, who stormed a theatres in Vienna where a play was being performed by refugees, a video of which was shared by the leader of the mainstream right-wing Freedom Party (FPÖ) Heinz Christian-Strache.

An expert recently quoted in the Kurier said the growing support for Freedom Party (FPÖ), who have increased their percentage in recent elections, creates an atmosphere in which more extreme right-wing groups can flourish.

“FPÖ and Identitarian movement are not in competition with one another, in fact the opposite: They compliment each other. The Identitarian activism on the street and in the social media mobilises younger layers for freedom aims.,” said Bernhard Weidinger, historian at the University of Vienna and the anti-fascism organisation Documentation Archive for Austrian Resistance.